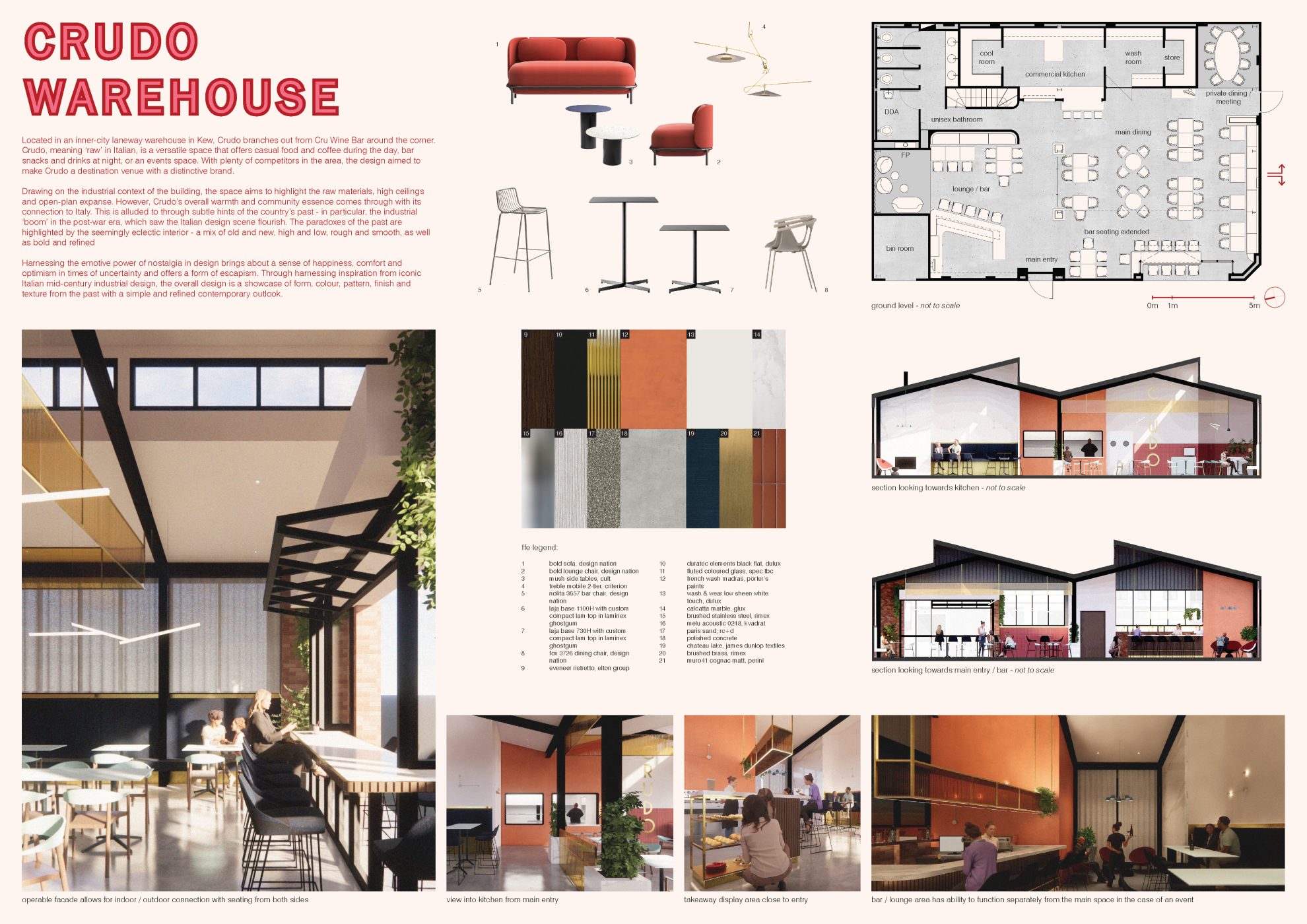 Awarded the state prize for the Design Institute of Australia’s (DIA) 2022 Australian Interior Design Graduate of the Year (Vic/Tas), Alecia Mostert shares her winning project schemes and talks transitioning from a student to an interior design professional. 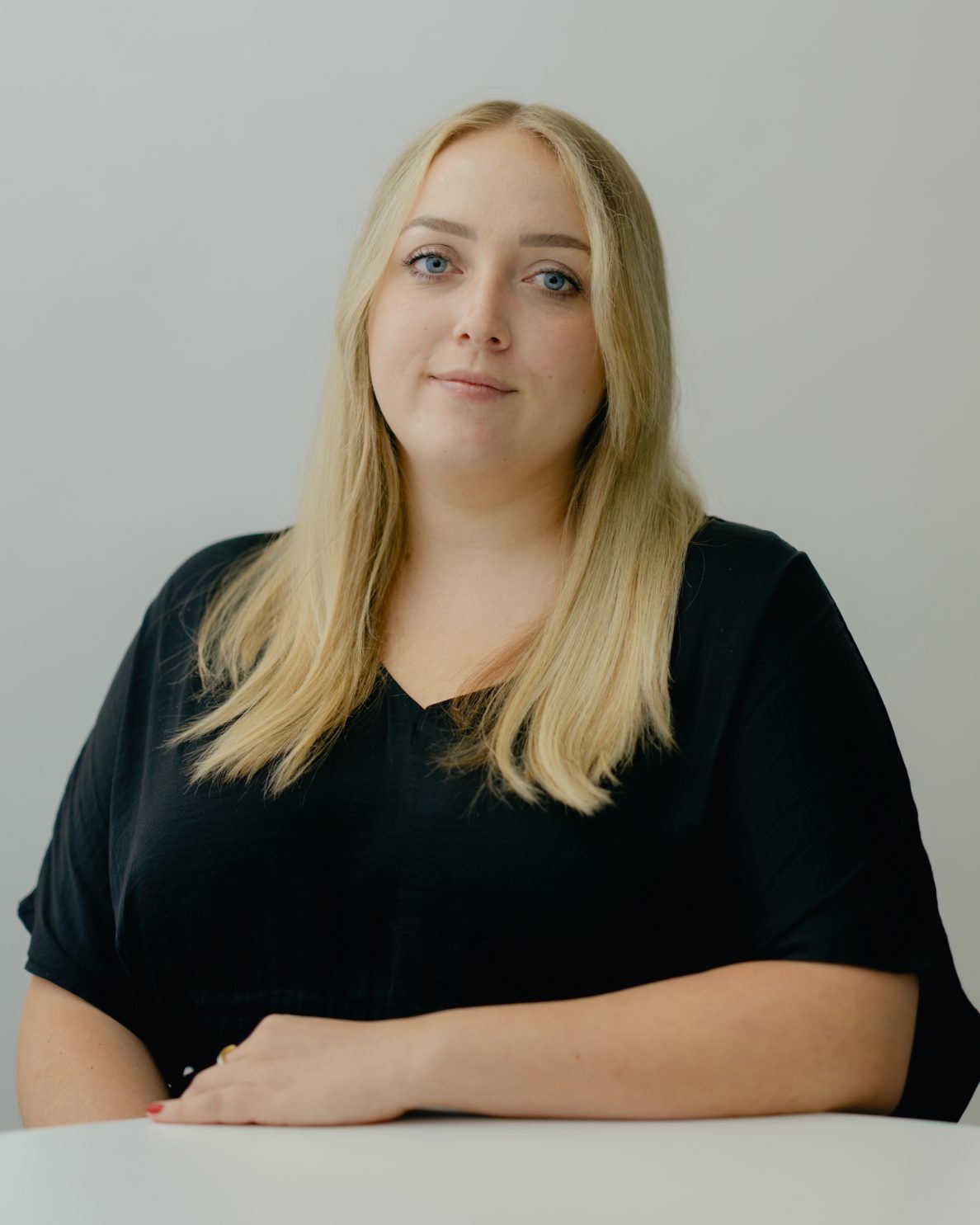 The Graduate of the Year Awards (Gotya) is DIA’s flagship program for emerging designers and was created to support and celebrate exceptional Australian designers as they embark on their careers. Narrowed down from over 200 submissions, Alecia, who studied at Collarts (Australian College of the Arts), captured the judges’ attention with her thoughtful and comprehensive projects schemes.

Congratulations on winning Interior Design Graduate of the Year in Victoria and Tasmania – how do you feel?

Thank you! It’s still sinking in, but I’m feeling honoured and proud to have my work recognised on this platform created by the Design Institute of Australia for young designers.

Can you give us some insight to your design thinking that underpinned your graduate projects?

I have always believed in a holistic and collaborative design approach, which stems from my background in architecture. My design thinking is centred around the human experience, with consideration towards social and environmental aspects, as well as incorporating local products and designer’s work. 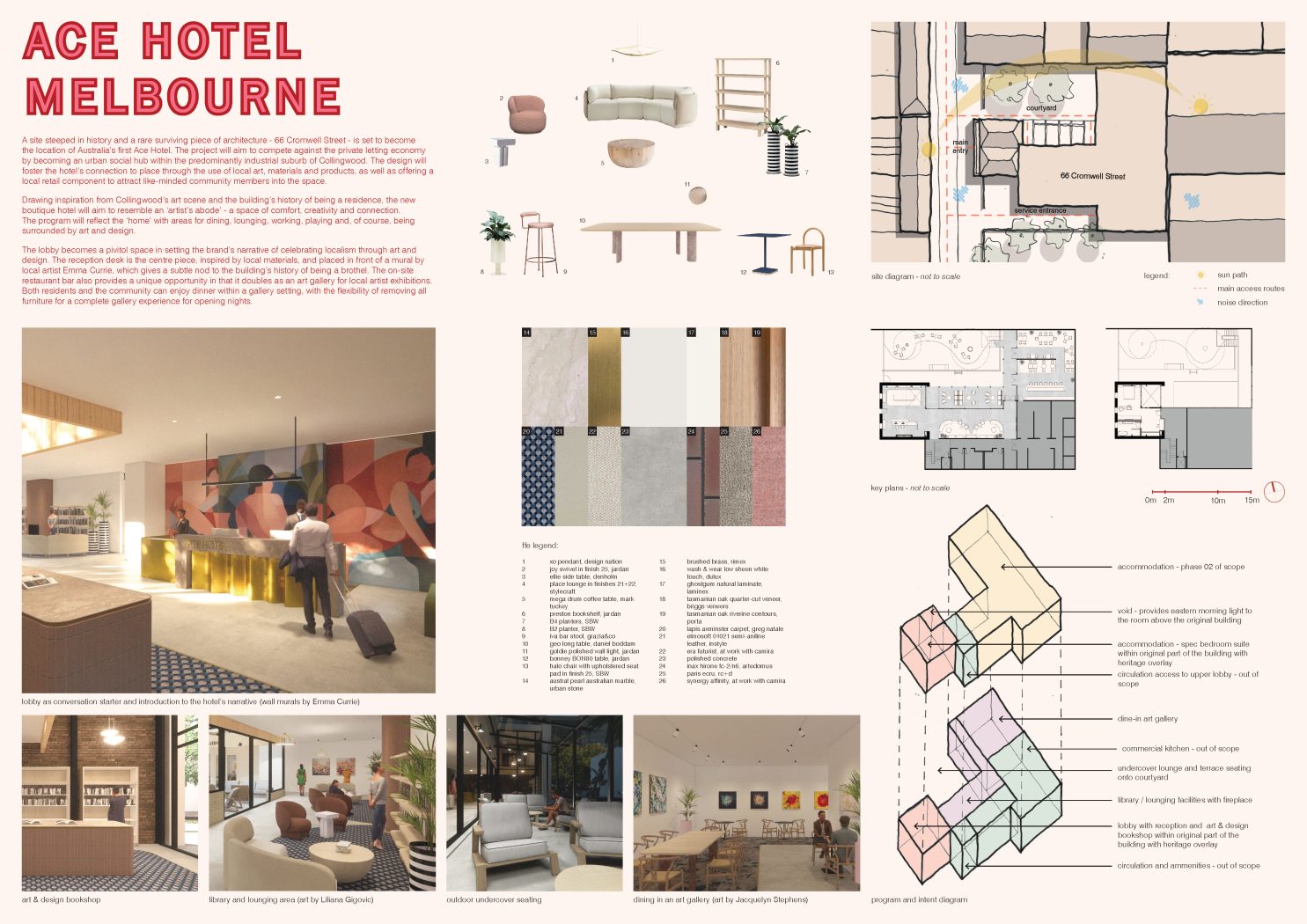 Alecia's design foster the hotel’s connection to place through the use of local art, materials and products 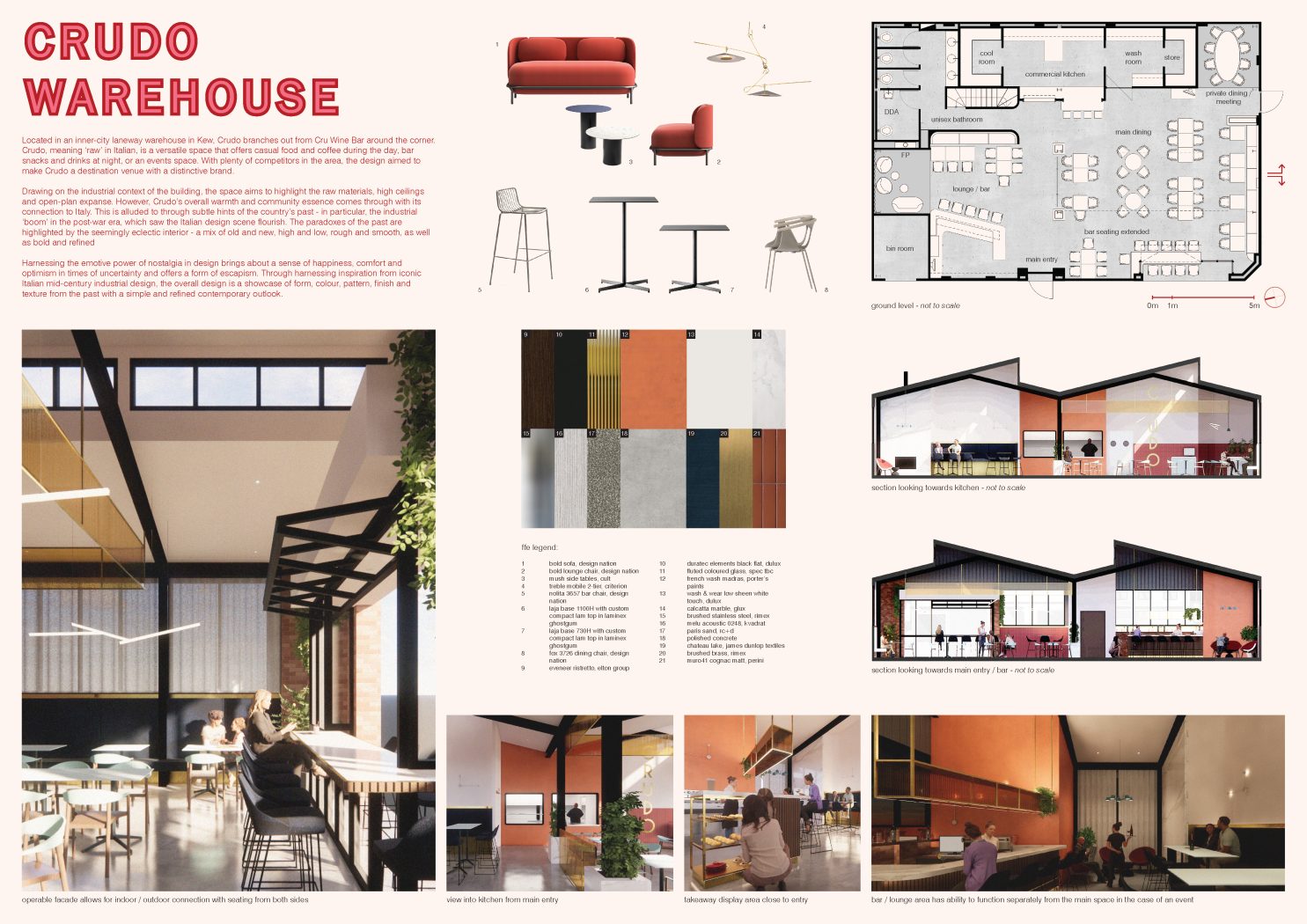 With plenty of competitors in the area, Alecia's design aims to make Crudo a destination venue with a distinctive brand. 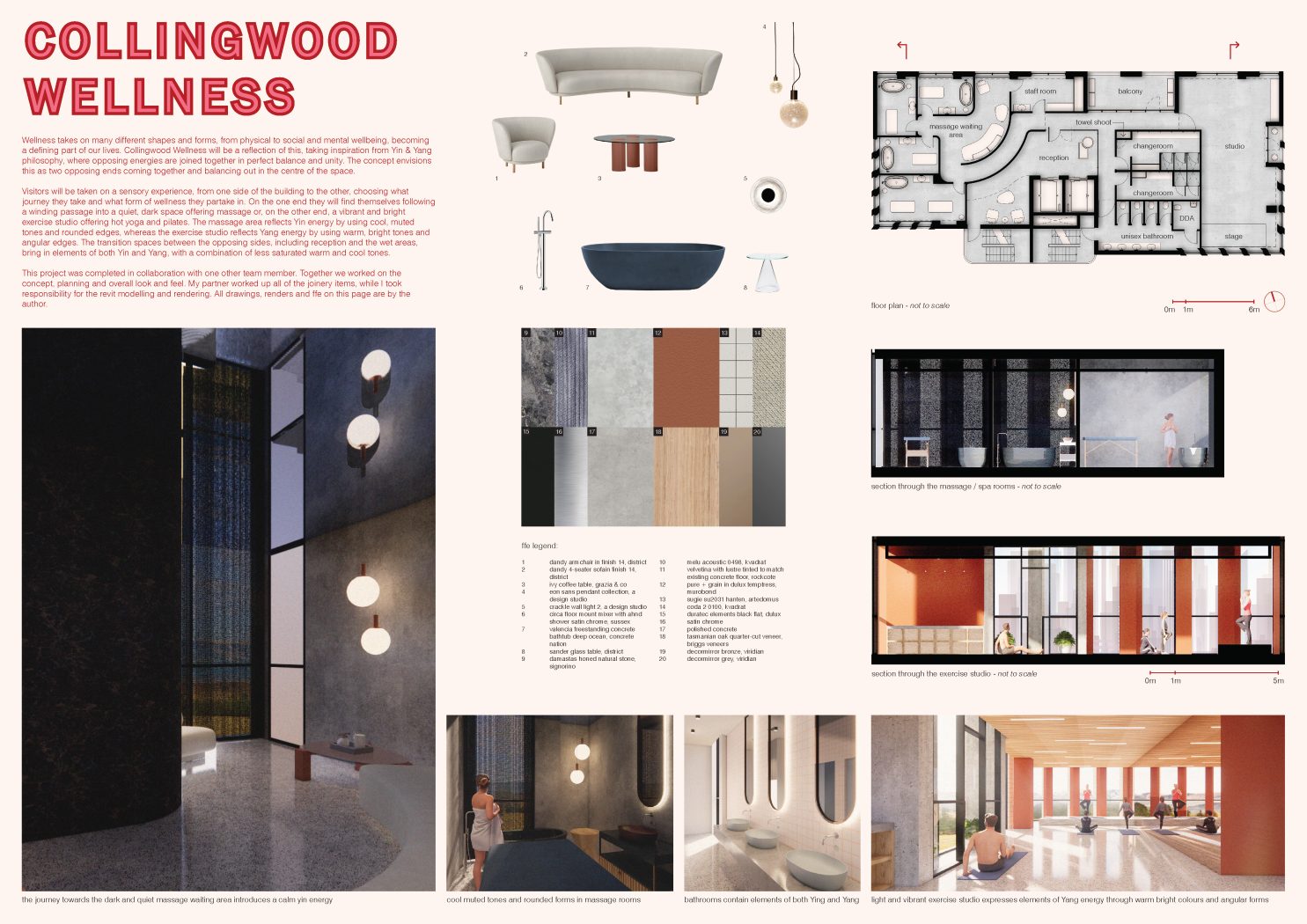 This project was completed in collaboration with one other team member. Together they worked on the concept, planning and overall look and feel. 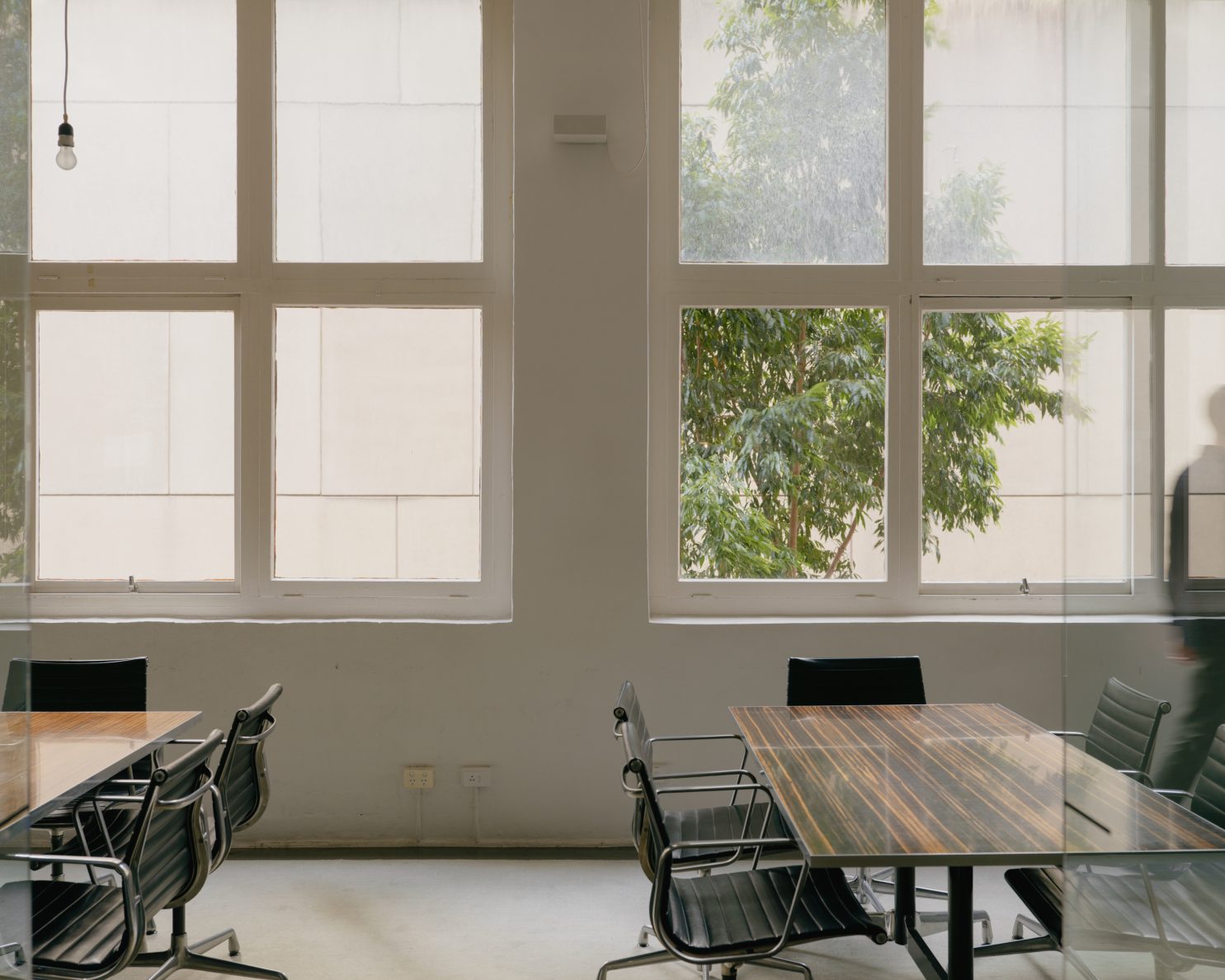 The Carr studio on Flinders Lane. Photography by Gavin Green.

Now working as an interior designer Carr, what lessons from university do you carry with you?

My time at university taught me how to communicate my ideas in multiple ways – written, verbal and visual. My software skills were also invaluable moving into professional practice.

Since working at Carr, I have been exposed to the various stages/stakeholders within a project and come to the realisation that good communication and networking is an important part of my career development.

What advice would you give other young designers at studying or transitioning from university?

I would advise young designers to take any opportunity to get more experience and exposure within the industry and to start networking as early as possible!

As a state winner, Alecia is in the running for the national award, which will be announced at the Designers Australia Awards around the country on Wednesday 3 August. We wish Alecia the best of luck.

Read Five Minutes with Lauren Kay  who reflects on her first six months at Carr as an interior designer.

Ideas
All Dynamic Restraint Carr culture Ideas Profile Insights Design Art
ASMR and adapting how we communicate
The power of brand
Alecia Mostert recognised with state DIA award
Five minutes with Chloé Walton
International telecommuting: an architect’s experience
Five minutes with Etoile Nasrallah
When hybrid works
Responding to supply chain issues
Nicci Green and her artisanal nature
200 Queen Street revisited
Norton Rose Fulbright revisited
Generational timelessness
Understanding ‘boomerang employees’
An exploration of design philosophy
Boutique residential design essentials
NGV Contemporary: once-in-a-generation cultural landmark
Making work meaningful
ISO certification and the afforded possibilities
Five minutes with Lauren Kay
Workplace design: what does the future hold?
Why we use concrete
The Westin revisited
Five minutes with Sam Stefanou
John Bradley’s quest for knowledge
A renewed sense of optimism
Carr holiday reading list
A summer guide from our friends
Jackalope – a sustainable benchmark
A welcome return for working parents
Marquise apartments revisited
Five minutes with Laura Casey
Q&A with photographer Dianna Snape
Architecture and Interior Design: a dual discipline perspective
Five minutes with Kyal Erdman
Watch: a sense of calm
Third Spaces – an extension of the workplace
Lessons on remote collaboration
The Carr podcast list
Merriwee revisited
Rokeby Street – a breathing space
Talking Design x Sue Carr
Watch: a natural beauty with Habitus TV
Chris McCue reflects on embracing the unknown
Calmly balanced
Developing the architectural language for 835 High Street
Design trends come and go – Sue Carr’s vision has never wavered
Q&A with Studio Ongarato
A life-long pursuit of excellence honoured
The importance of art in public spaces
Five decades in the making: Sue Carr on the evolution of Carr
The curious mind of Robert Owen
Mapping the changing workplace with Richard Healy
Law firms for the future
A new urbanism
The way forward
Whitepaper: Changing buyer demands in multi-residential
Escaping to the coast
Limber up – the new world is flexible and ready
Convenience is an understatement: The International
Richard Beel considers the power of materiality in architecture
Concrete modern
The Carr reading list
In search of lifestyle
Creating value in commercial spaces
Keeping inspiration high – even remotely
Q&A with artist Anna-Wili Highfield
Anticipating a rise in regional tourism
The importance of place: Monocle releases ‘Only in Australia’ podcast
What we’re eating and drinking in lockdown
How is the multi-residential market faring?
Nick Carr on navigating a time of constant transition
Q&A with Maryanne Moodie
On bringing value to the workplace with Molly Shelton
David Brooks on enriching architecture with landscape
The virtual experience
Sue Carr reflects on business and the value of design
Playing the long game: Stephen McGarry on design longevity
7 articles to help you navigate the new normal
Introducing a new talent: Rebecca Trenorden
Nicole Coutts on the future of the workplace
Shopping in the time of COVID-19
In Profile: Chris McCue
Design tips for remote working
Decentralising the workplace
Celebrating International Women’s Day at Carr
The design of everyday rituals
Into the mind of Christopher Boots
Robert Owen’s geometry of light, space and form
Head in the clouds
Building and nature collide
A new era for legal practices
Reframing two icons
The future of hotel hospitality
Japan in a new light
On the importance of timeless design
Digital disruption: On the need for focused working
Designing for future generations
The influence of good design
Finding balance: A hybrid approach to the workplace
Close