The art of transformation

Jackalope Hotel is in a class of its own. Set on the Mornington Peninsula it breaks all the rules and redefines what a destination hotel can be. 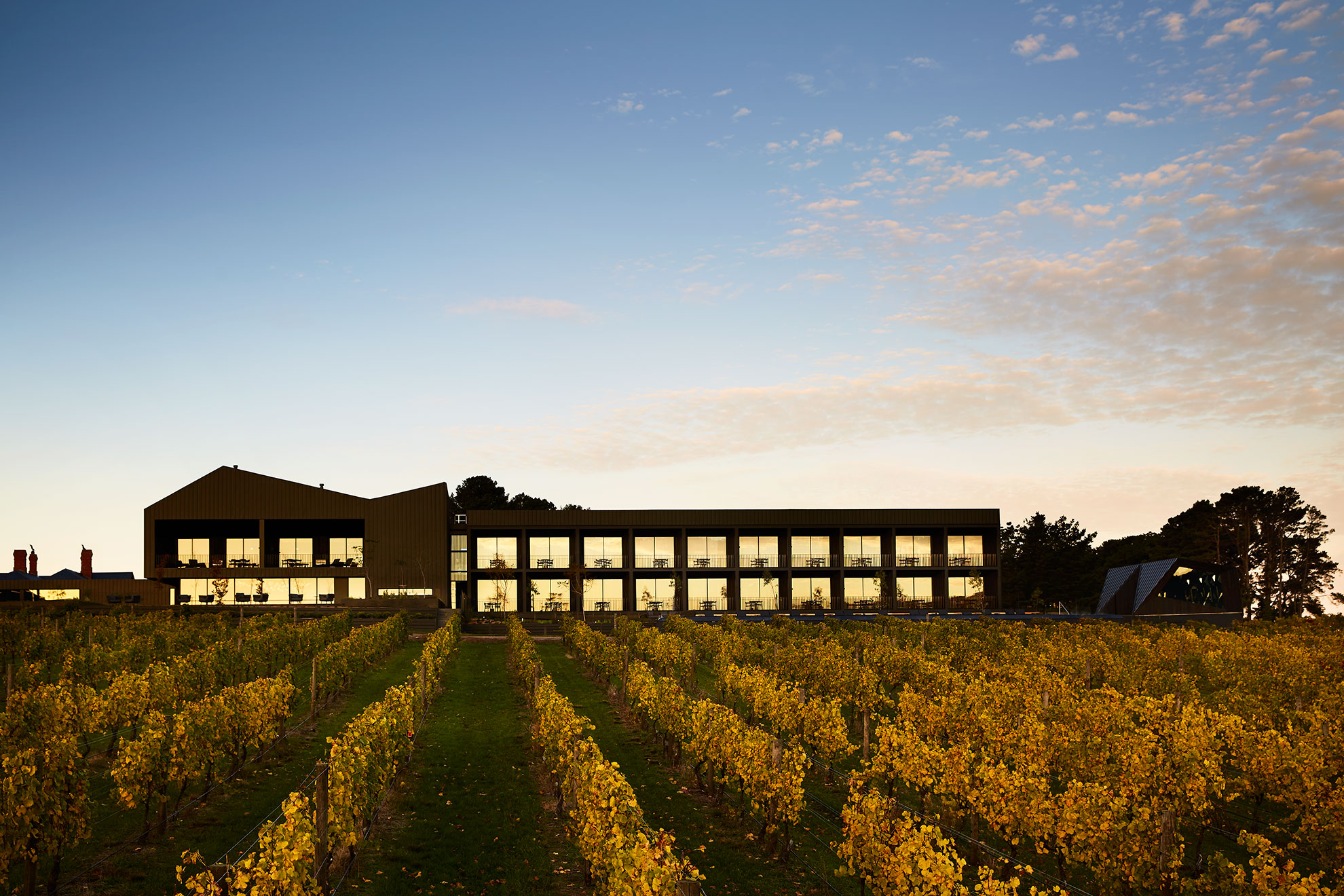 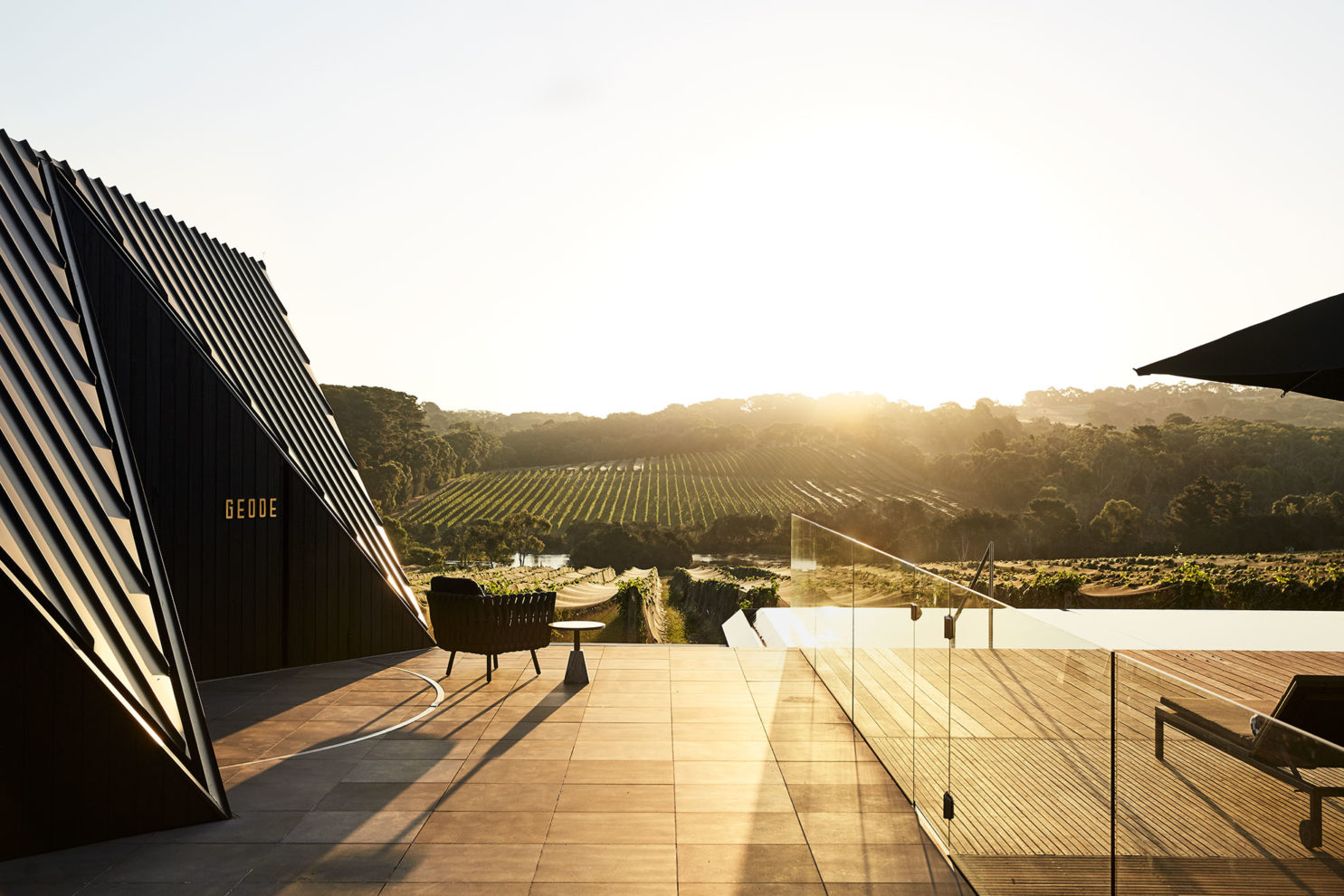 Situated at the crest of a gently sloping hill overlooking the sculptural landscape of vines sits imposing black pyramid sculptures. A simple, honest, almost agricultural driveway winds its way through undulating rows of vines and century-old native trees with the built form hidden from view until a point on top of a small rise where the hotel looms large and dominant; unexpected, dramatic and monolithic in form.

Implicit rather than explicit, Jackalope represents a homage to Australian architectural typologies and mythologies, evidenced most profoundly in the direct siting and form of the main building as an imposing agricultural barn – a counterpoint to the existing winery infrastructures.

The hotel’s form is treated as four distinct structures. On arrival, a single storey link acts as the hotel entry pavilion providing a contemporary connection and contrast between the historical architecture of the restored heritage cottage and the imposing, modernist form of the new hotel. 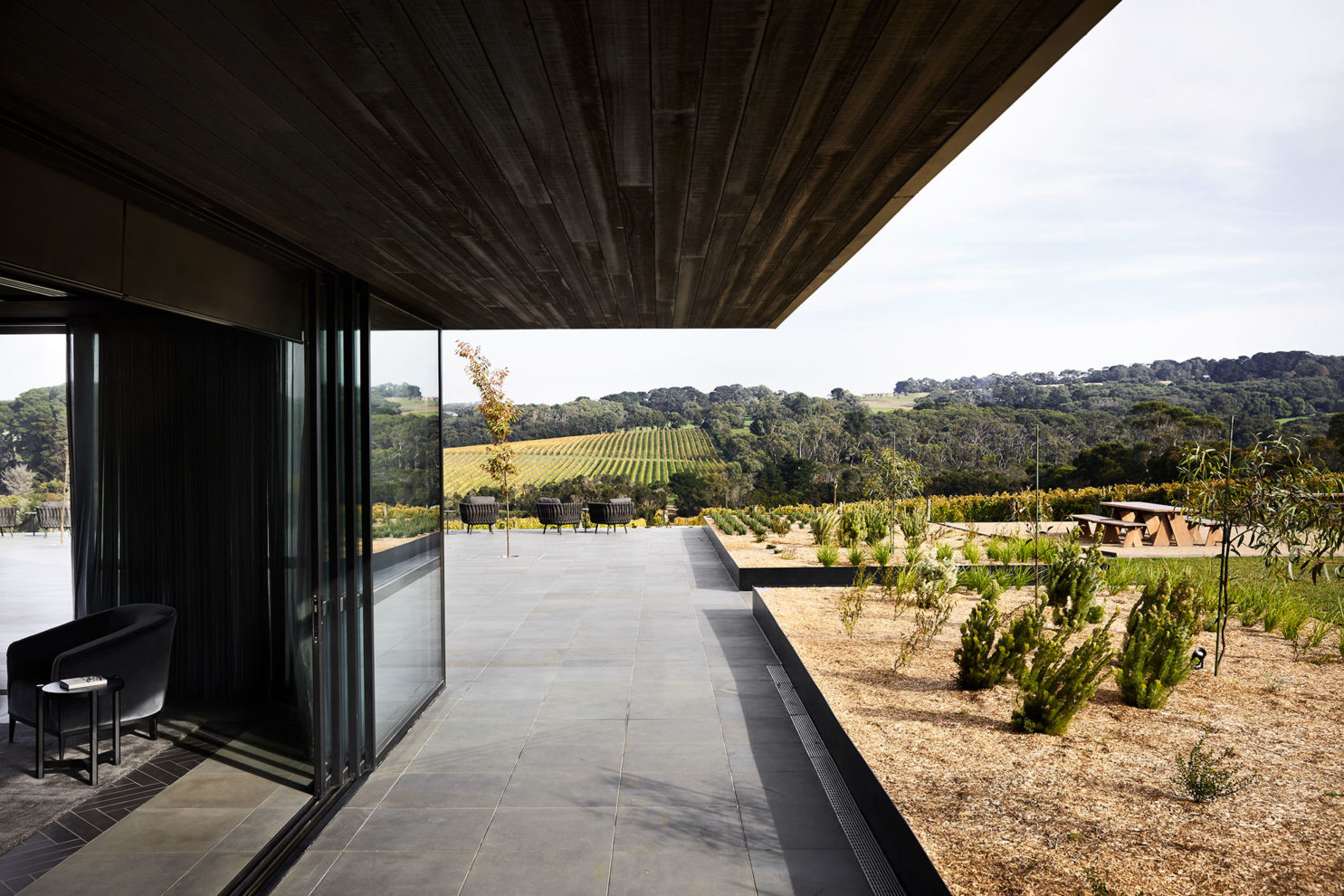 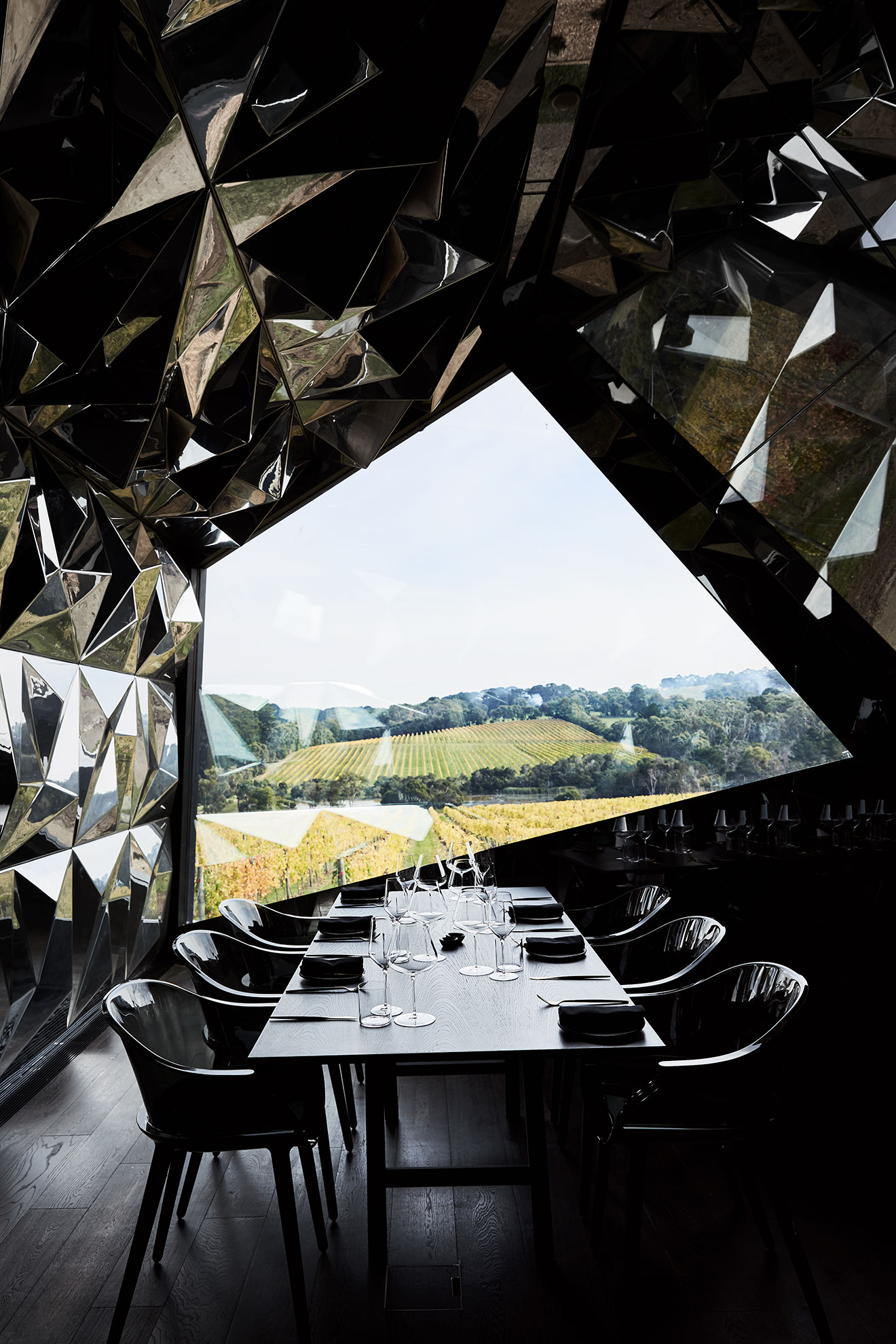 Inside the Geode that looks out over the vineyard. Photography by Sharyn Cairns 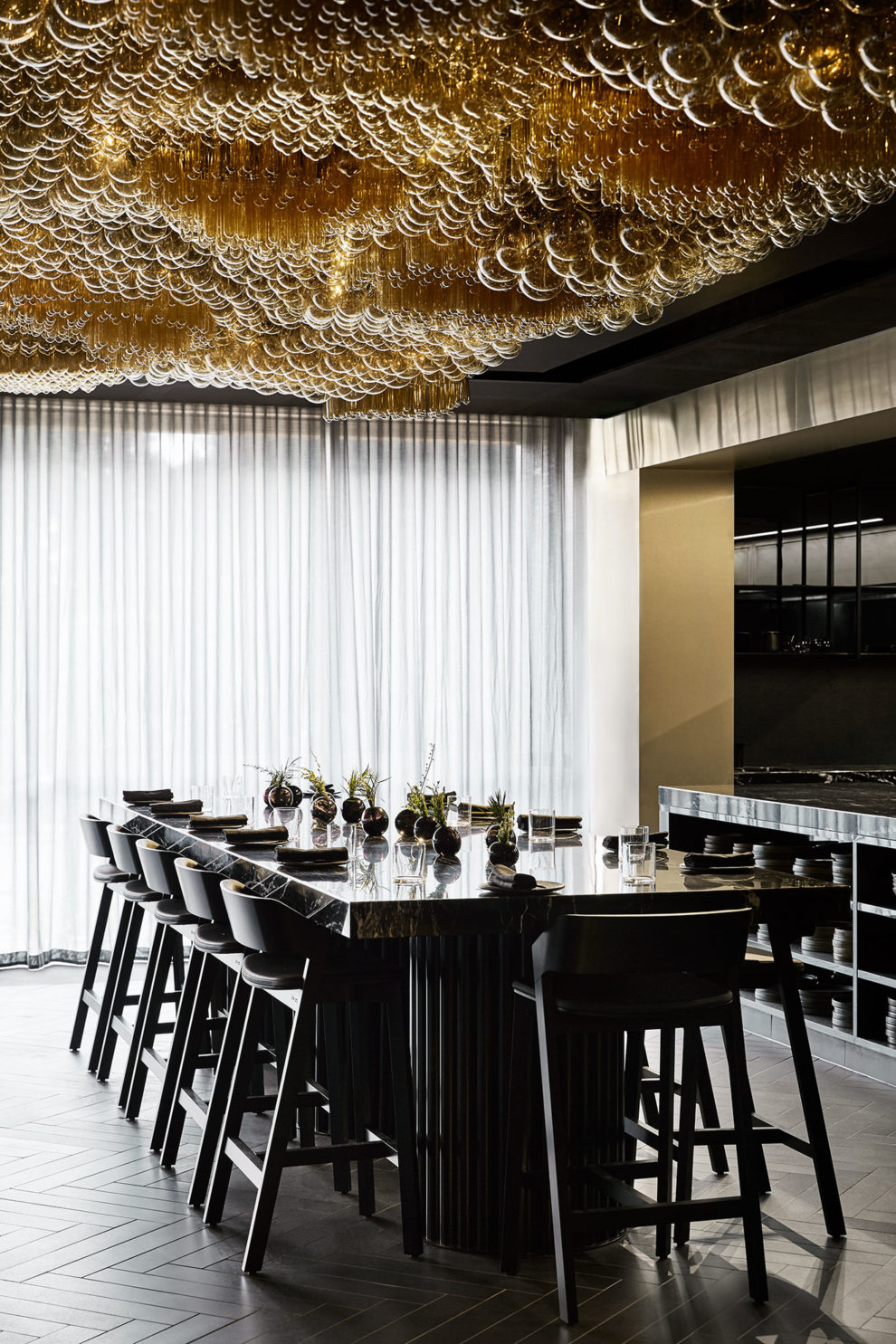 Over 10,000 globes transform the ceiling of Jackalope's Doot Doot Doot into a blanket of golden, textural art that wave in an enthralling glow for the diners below. Photography by Sharyn Cairns.

Set to redefine the term ‘destination hotel’ and representing one of Victoria’s few boutique establishments, Jackalope offers a new-concept hotel, fuelled by a dynamic and truly design-driven experience.

Bold and adventurous in its design, guests are immersed in a journey that delights and surprises – successfully embracing its winemaking origins, yet celebrating a conceptual sensibility and sensory experience that is distinctive, magical and genuinely true to place.

Celebrating the mystery and whimsy of alchemy and the art of transformation, the hotels signature bar, Flaggerdoot, marks the start of the journey sparking curiosity in a daring and edgy salute to experimentation and intrigue. Flaggerdoot’s narrative reflects Distillation, the first stage of Alchemy, representing the beginning of a journey and a taste of the story to follow. Effective in defining a sense of purpose and place, the bar immediately captivates and surprises. 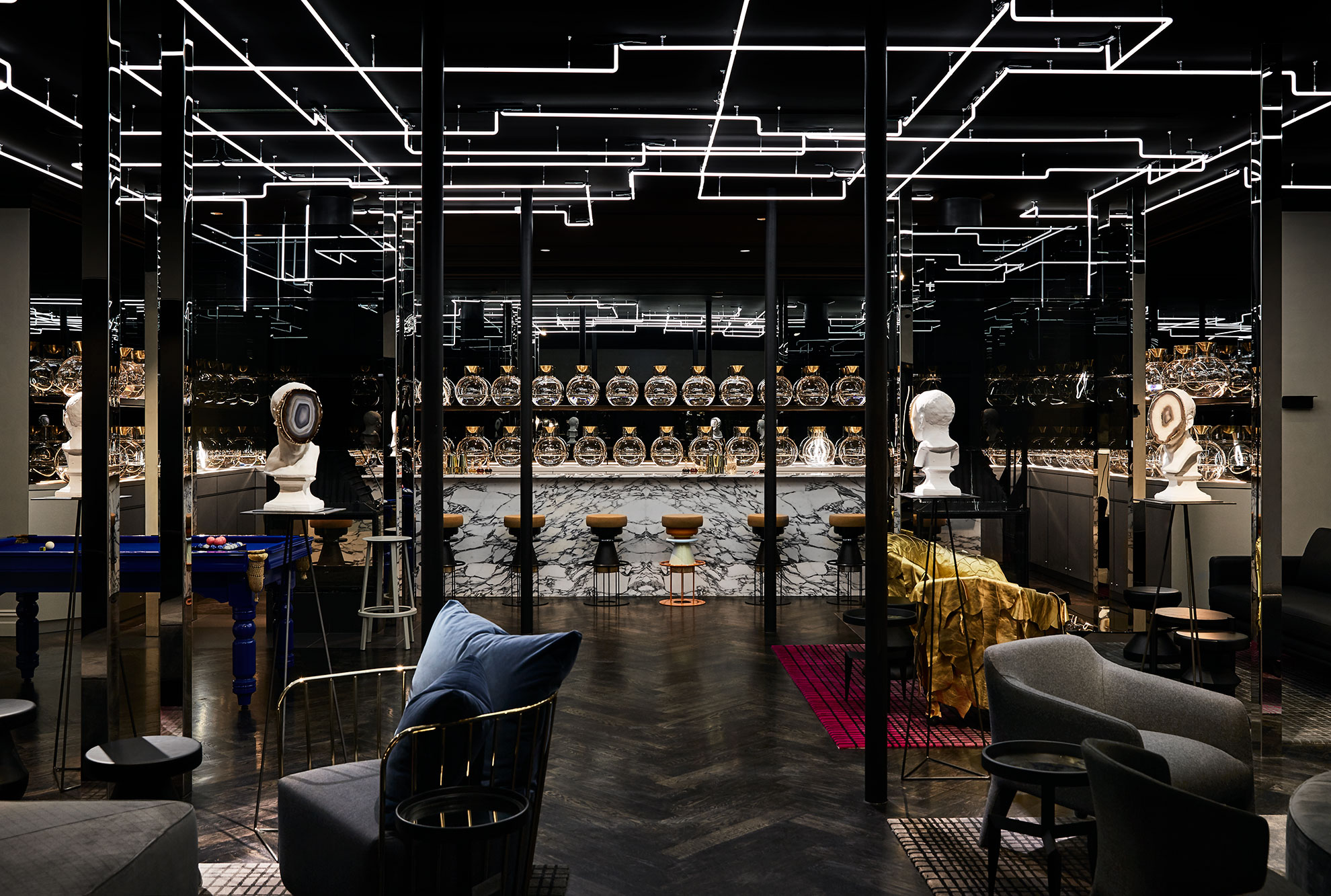 Jackalope's signature bar, Flaggerdoot, celebrates the mystery and whimsy of alchemy and the art of transformation. Photography by Sharyn Cairns. 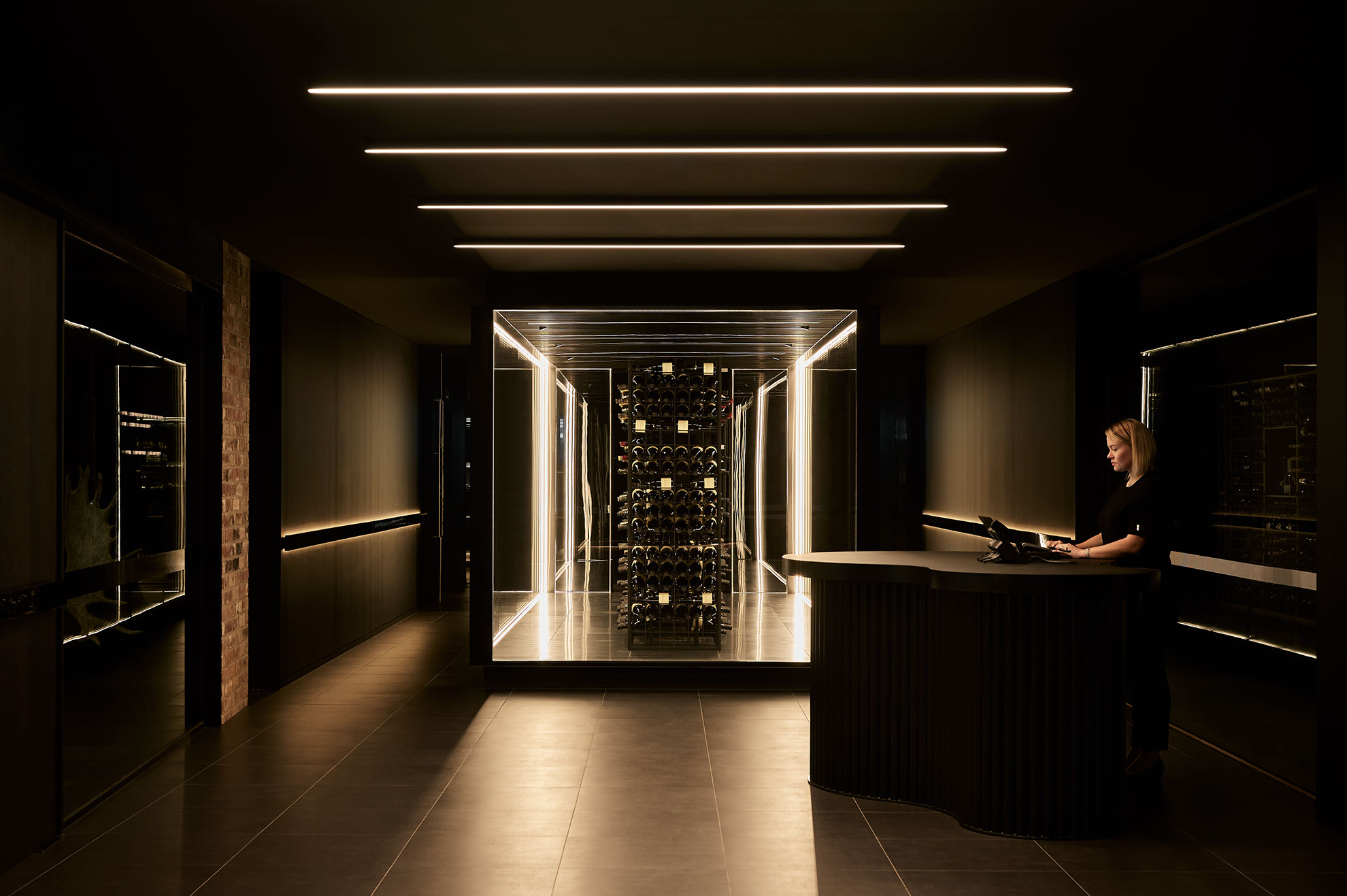 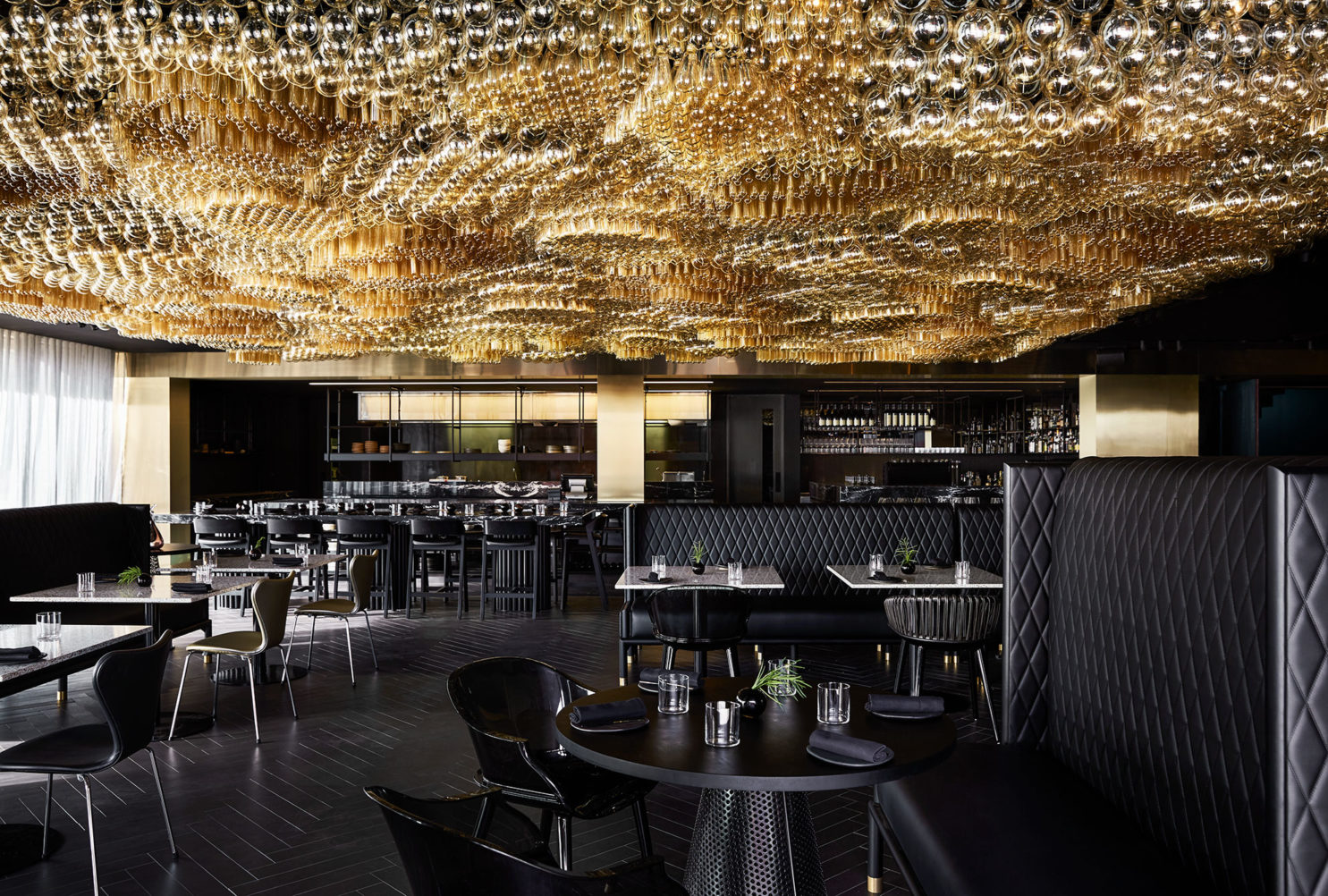 At once hypnotic and mesmerising, Doot Doot Doot – the hotel’s restaurant – is like dining in the wizard’s den. Ideas of brewing, bubbling, simmering and movement define this space and allude to the alchemic process of Fermentation.

The truly outstanding moment of the interior, however, is a spectacular light installation to the ceiling. The large installation floats suspended above the main fine dining room and is defined by 10,000 light globes shaped as flasks, test tubes and beakers, a clear reference to the mystery and experimentation of an alchemist’s laboratory. Through repetition and massing, the globes transform the ceiling into a blanket of golden, textural art that wave in an enthralling glow for the diners below. 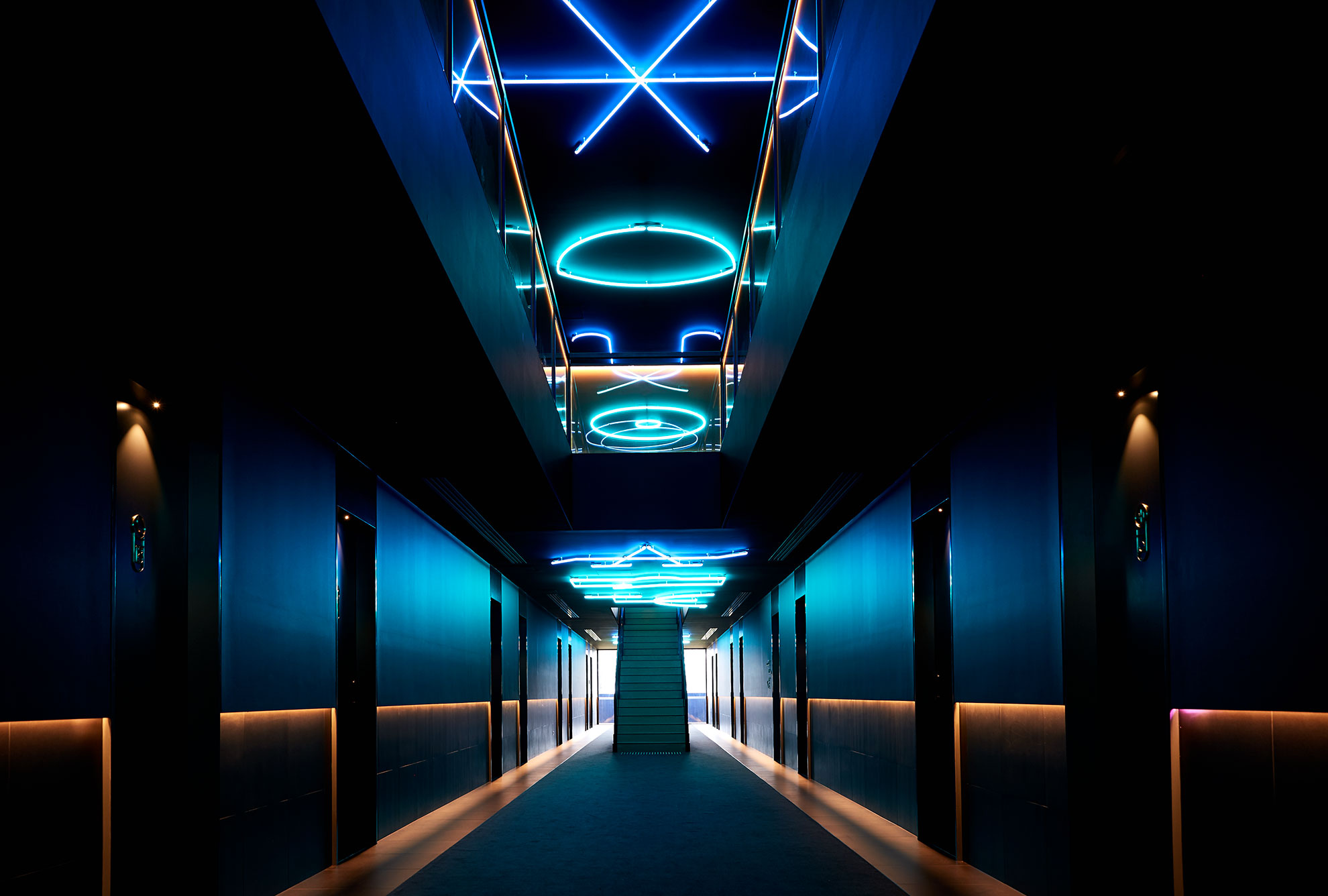 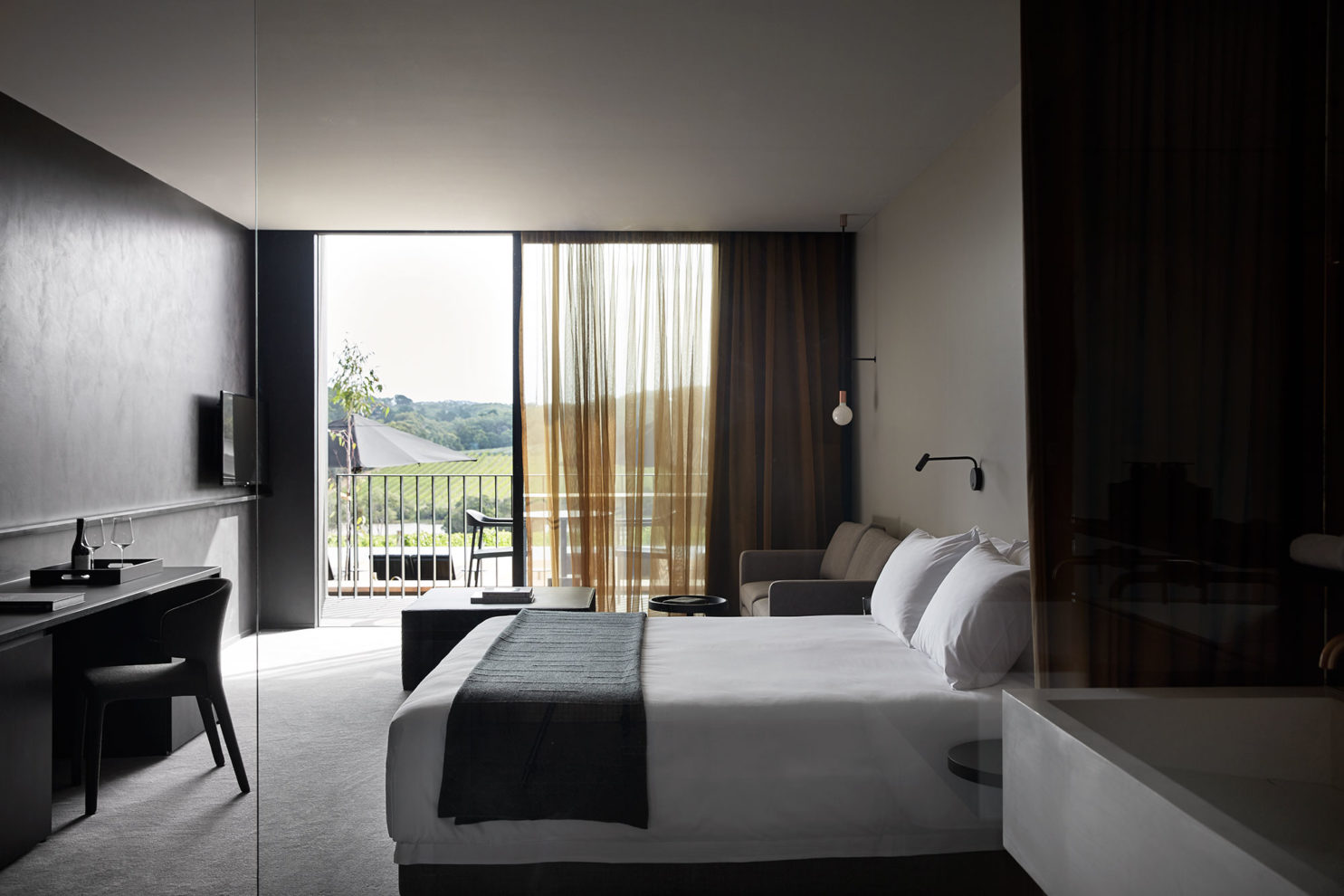 Guest rooms purposefully juxtapose the drama of the public spaces – providing a sense of calmness and sophisticated relief. The feeling throughout is one of tranquillity and retreat, an escape, as a considered balance and contrast to the high theatre and visual stimulus of the public realm. Four guest suite typologies align variously with understated tones of silver, gold, copper and bronze. Deliberately art free, framed views of the spectacular landscape provide a sense of reprieve and restfulness. While the lighting by Christopher Boots furthers this connection.

From the bottom of the driveway, through the seamless reception, neon-lit corridors and resting within a suite, not a single element at the Jackalope Hotel has been forgotten. The whole design embraces its origins while celebrating the future, resulting in the creation of a sensory experience that is distinctive and true to place. 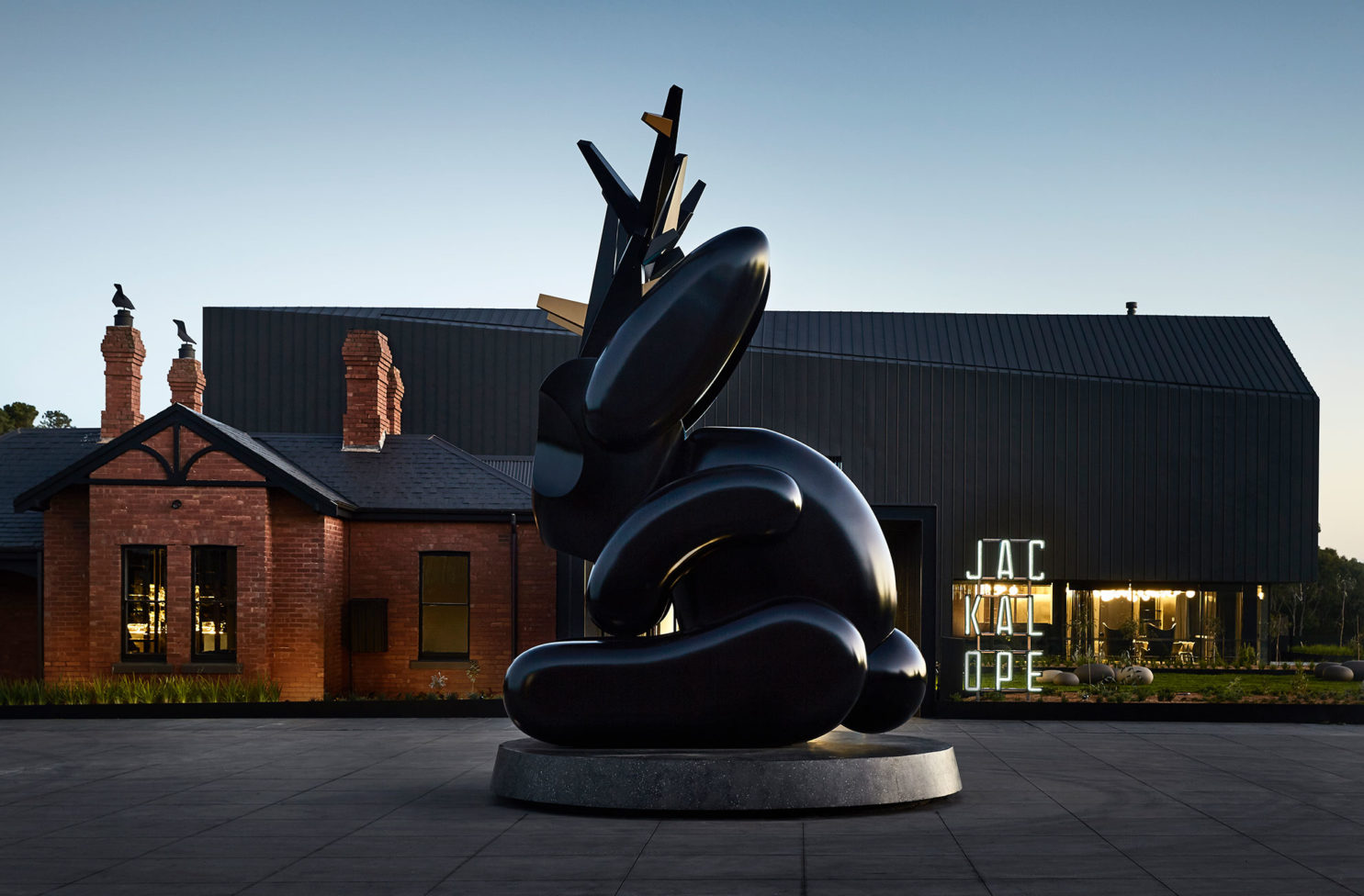 Carr’s ability to achieve immersive storytelling with a sophisticated and luxurious outcome exceeded my expectations.”