A journey of reductionism

East Melbourne Residence by Carr is a heritage home that has been reshaped for liveability. New additions, but mostly subtractions, help to build a home of nuance and refinement. 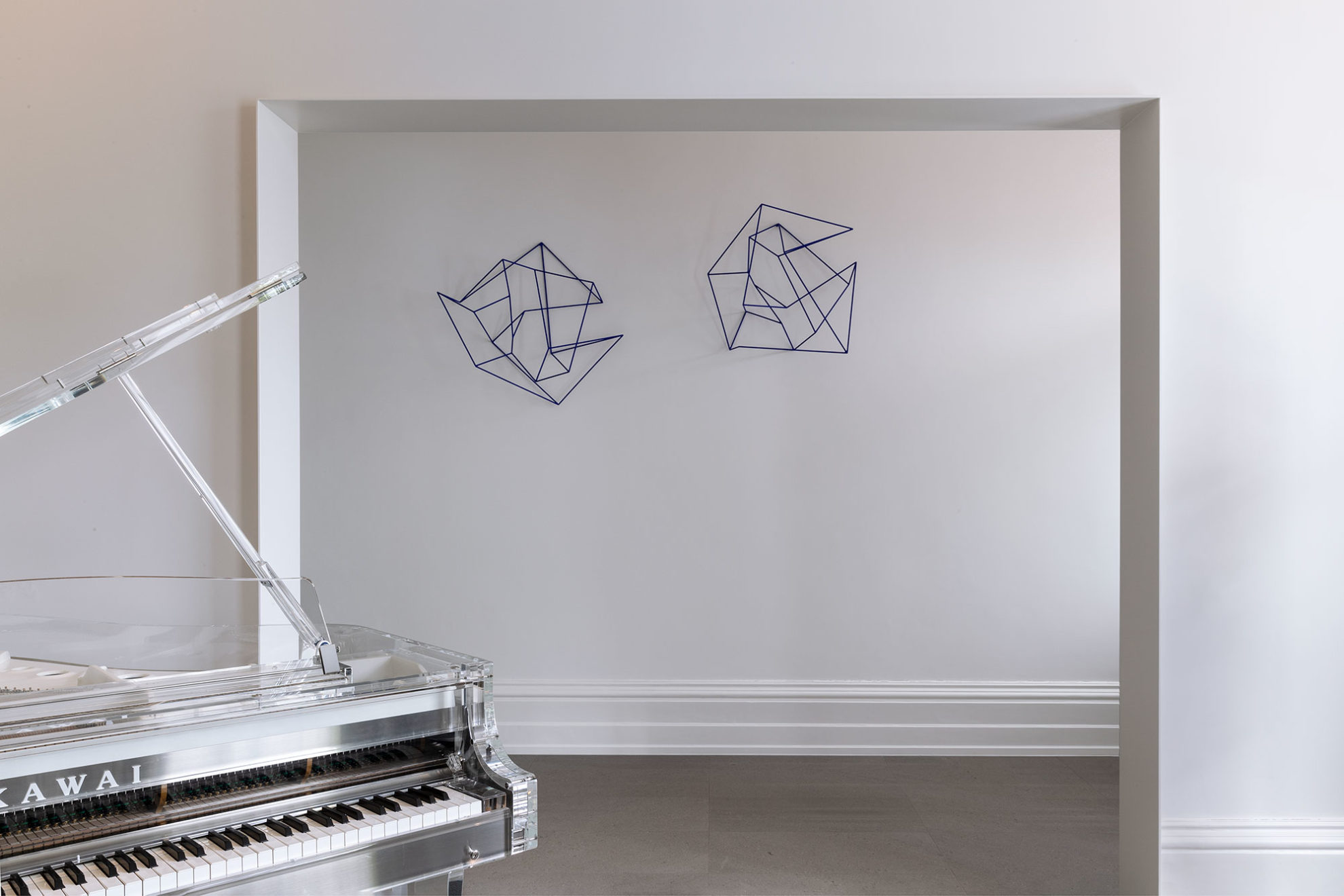 East Melbourne Residence is a project four years in the making, and it was journey of reductionism set within an exquisite 19th century Heritage-listed Victorian terrace house in East Melbourne. The design celebrates the existing Victorian architecture, while the process stripped it back to a functional and tranquil home.

Having lived in the house for some time before appointing Carr, the clients had a clear understanding of what they needed in a home and a defined idea of how they live as a family. We were then able to work with them knowing what the house meant to them and establish their aspirations. The site and context are what set this project apart but also present where the biggest challenges came from – overcoming the heritage constraints and a predominantly south oriented living zone. And typical of a lot of Victorian buildings, the house was dark and enclosed.

The site can be broken up into three key zones, the original terrace dwelling, a courtyard with new planting and landscaping, and a modern folly at the back which houses the garage and a self-contained guest accommodation.

The design involved the removal of 20th century additions, bringing the focus back to the original elements and designing complementary 21st century additions to read harmoniously with that of the Victorian character. Careful heritage planning was crucial in this project and through the building process an original window was discovered on the southern façade. In celebrating the history of the building, we retained the imprint of this window as a reminder of the building’s legacy.

In this project we set out to provide greater clarity and legibility to the plan, ensuring that no spaces are redundant, everything has a purpose, revitalising a grand heritage house into a contemporary family home.” 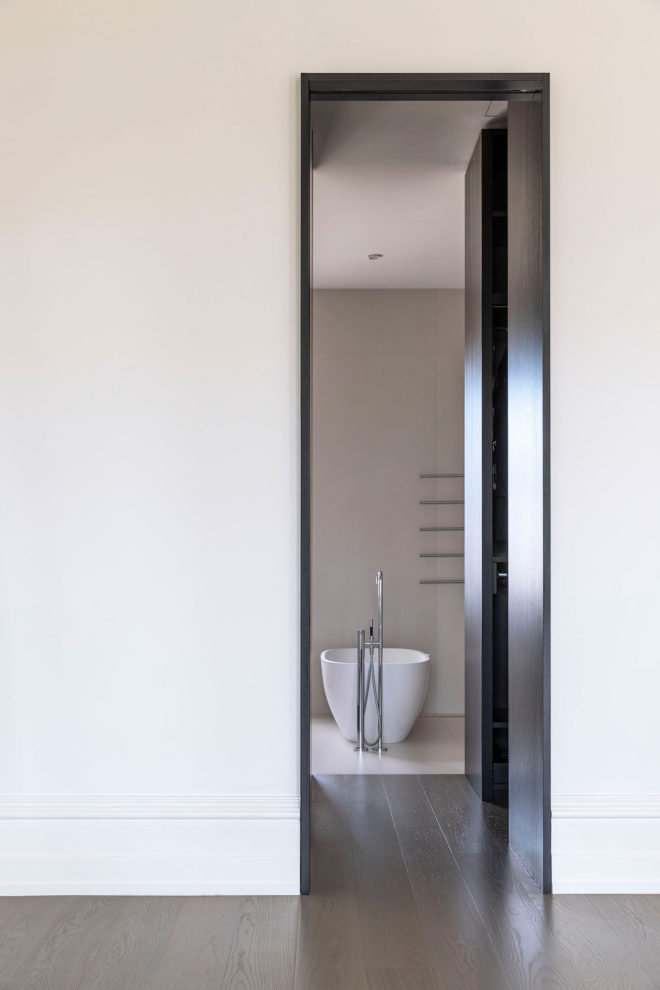 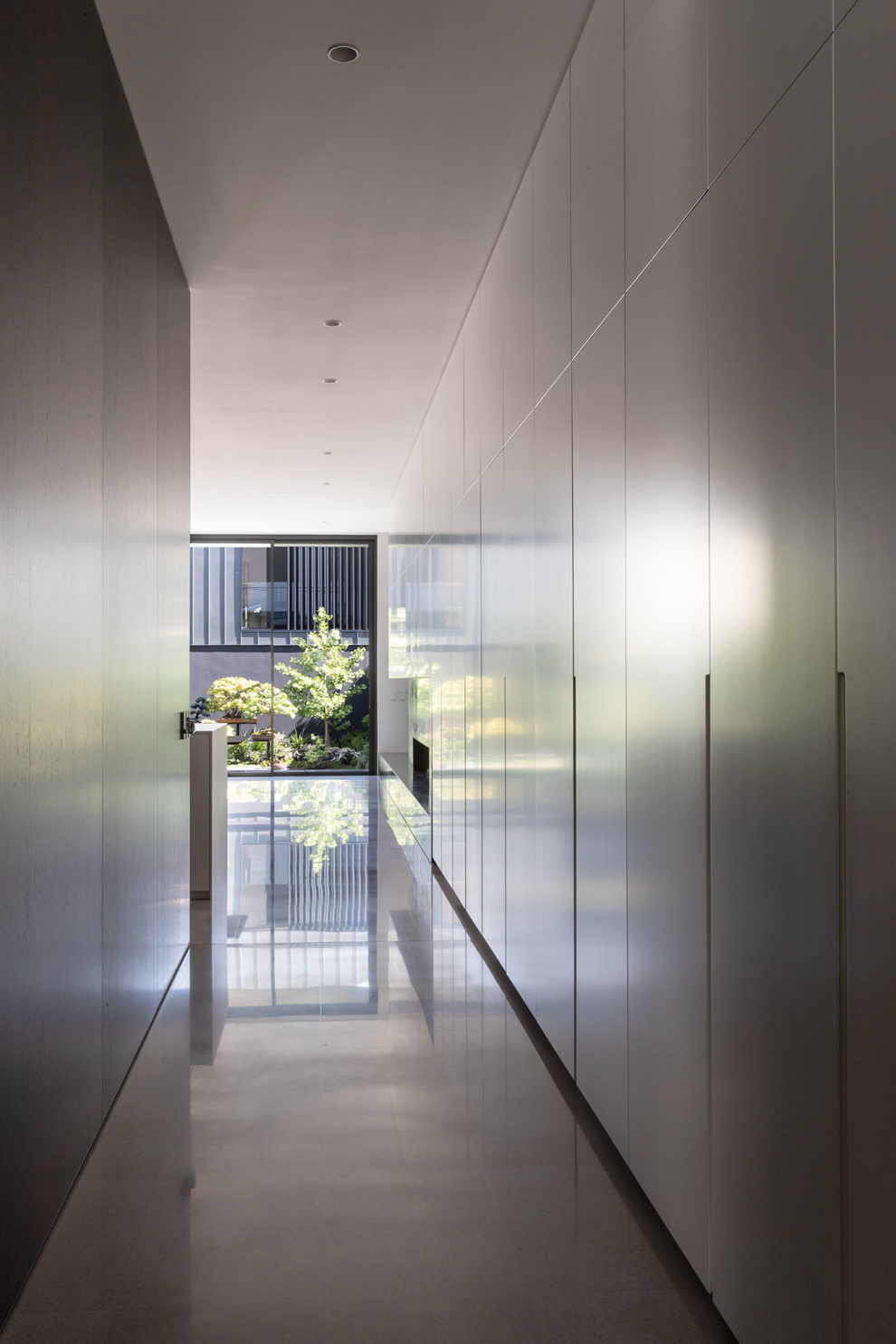 For the interiors, East Melbourne Residence was about reshaping the interior volumes to have more usable spaces in line with how the clients live. Some of the key considerations were the original details within the home, which are ornate and grand but previously lost. By paring everything back, those intricate elements have been brought to the fore alongside modern insertions. A monumental pivot door to the master suite was an exercise in context, interpretation and precision.

In terms of spatial planning, we flipped the original layout of the kitchen to bring in greater functionality and allow lines of sight along the length and width of the house. The layout and planning capture viewpoints and vistas to windows and greenery, offering a feeling of connectedness and intimacy. The interior has been shaped by an understanding of light and controlling it, whether artificial or natural.

Adaptability was key and the front room is an example of this coming to life. Once designated as a formal sitting room, it has been re-envisioned as a multi-use space. By cutting out a large opening on the western wall, which has then been lined with a minimalist steel frame, the front room has been opened up as an extended arrival hall, but it also operates as a music room, study and library, adapting to whatever is needed for whoever is using it at the time. This front library room includes bespoke furniture pieces, evocative of an earlier function but interpreted for the present day. The new space also looks out to a tranquil water feature – an element that greets people and sets a calming tone. 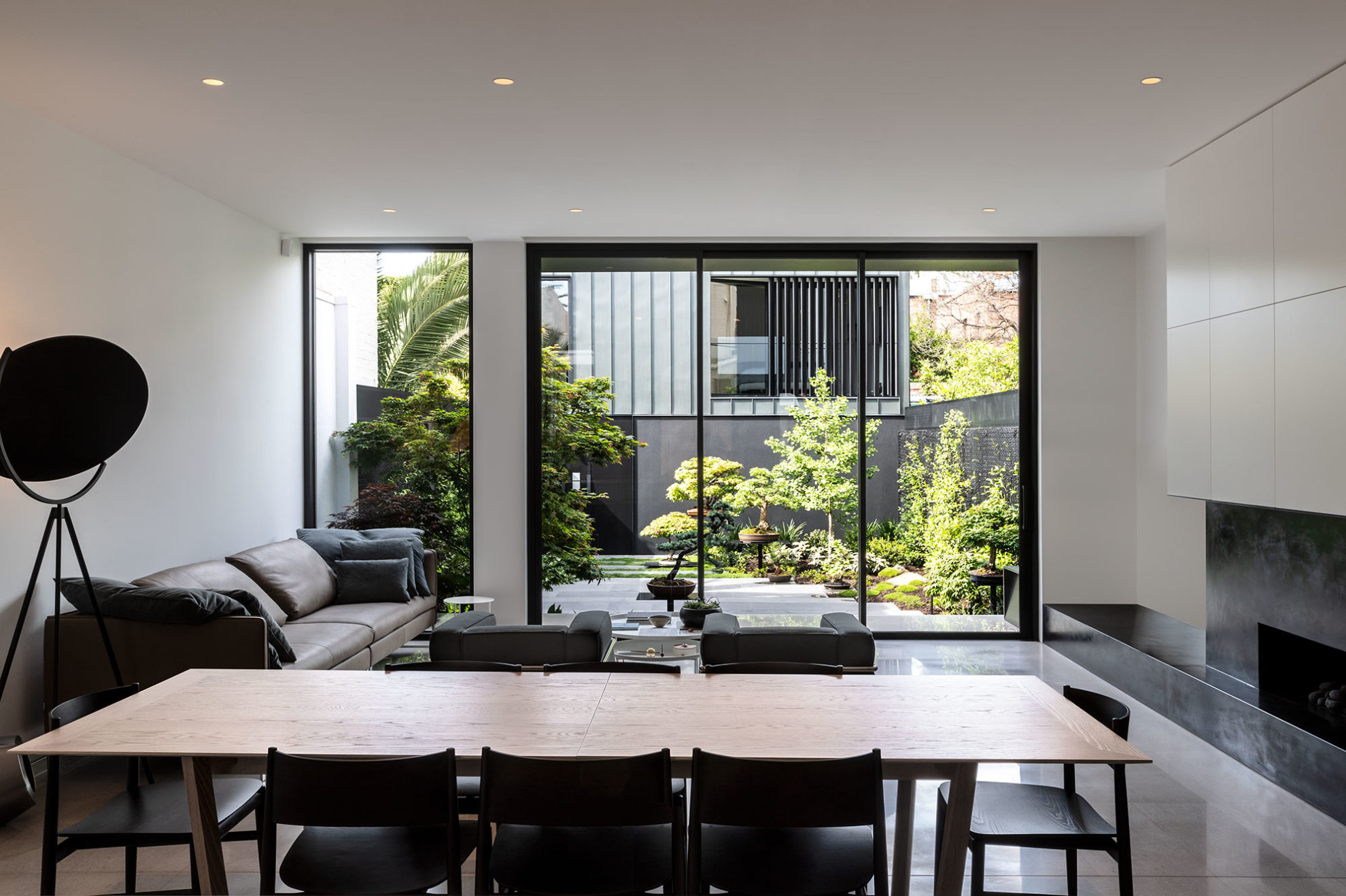 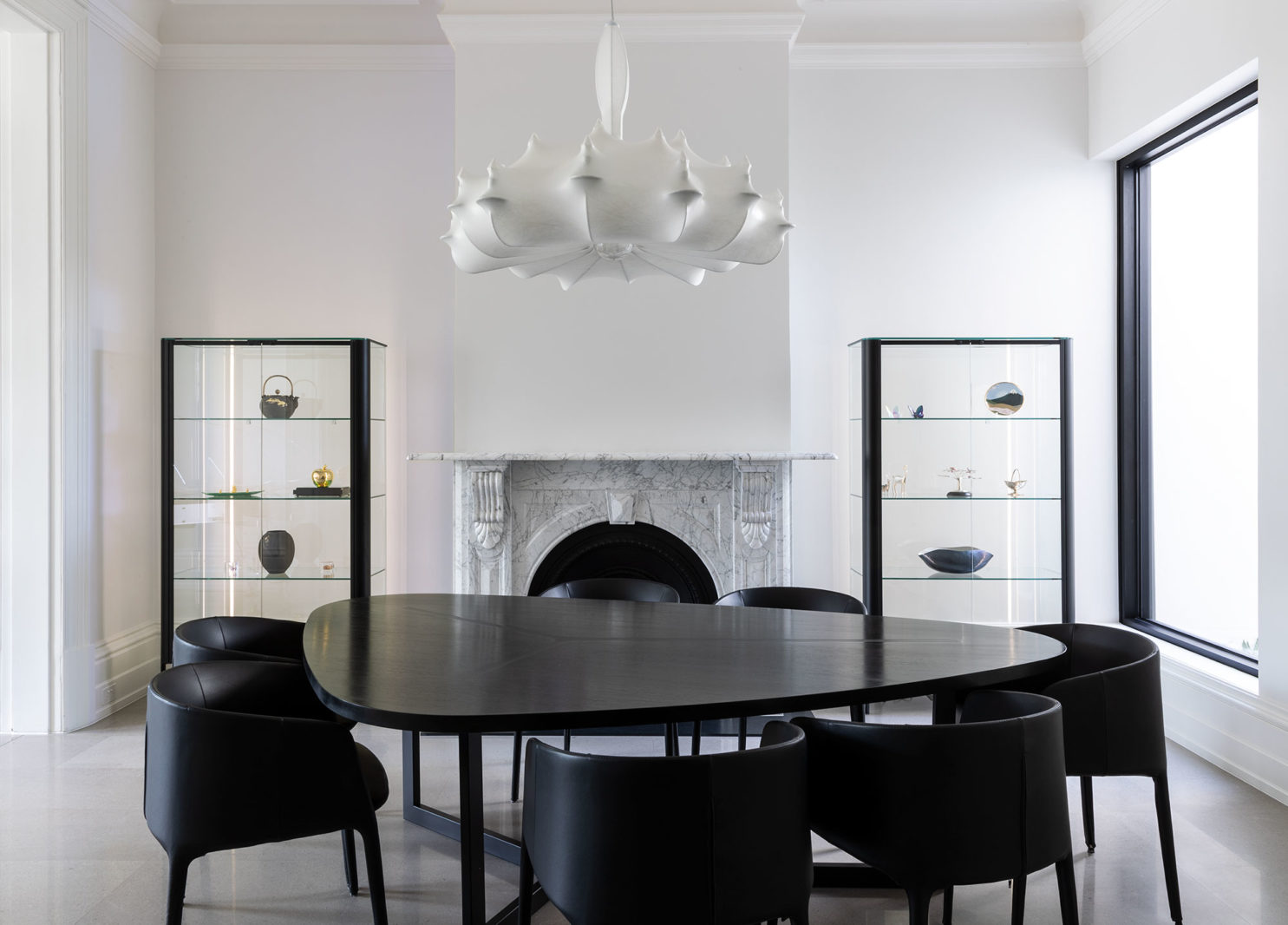 In terms of materiality, simplicity and reductionism again are key. The floor elevates expectations for a heritage home from the very first moment of setting foot inside. Set in a honed limestone, the single floor finish creates a seamless plane, anchoring the entire project with a soft underfoot feeling.

All extraneous elements have been hidden or screened, the two main devices being a ‘black box’ scullery and a storage wall that runs the length of the main living space integrating the aquarium, fireplace and TV, as well as general storage needs. Elements are then opened and used as needed, while mess can be simply shut away. 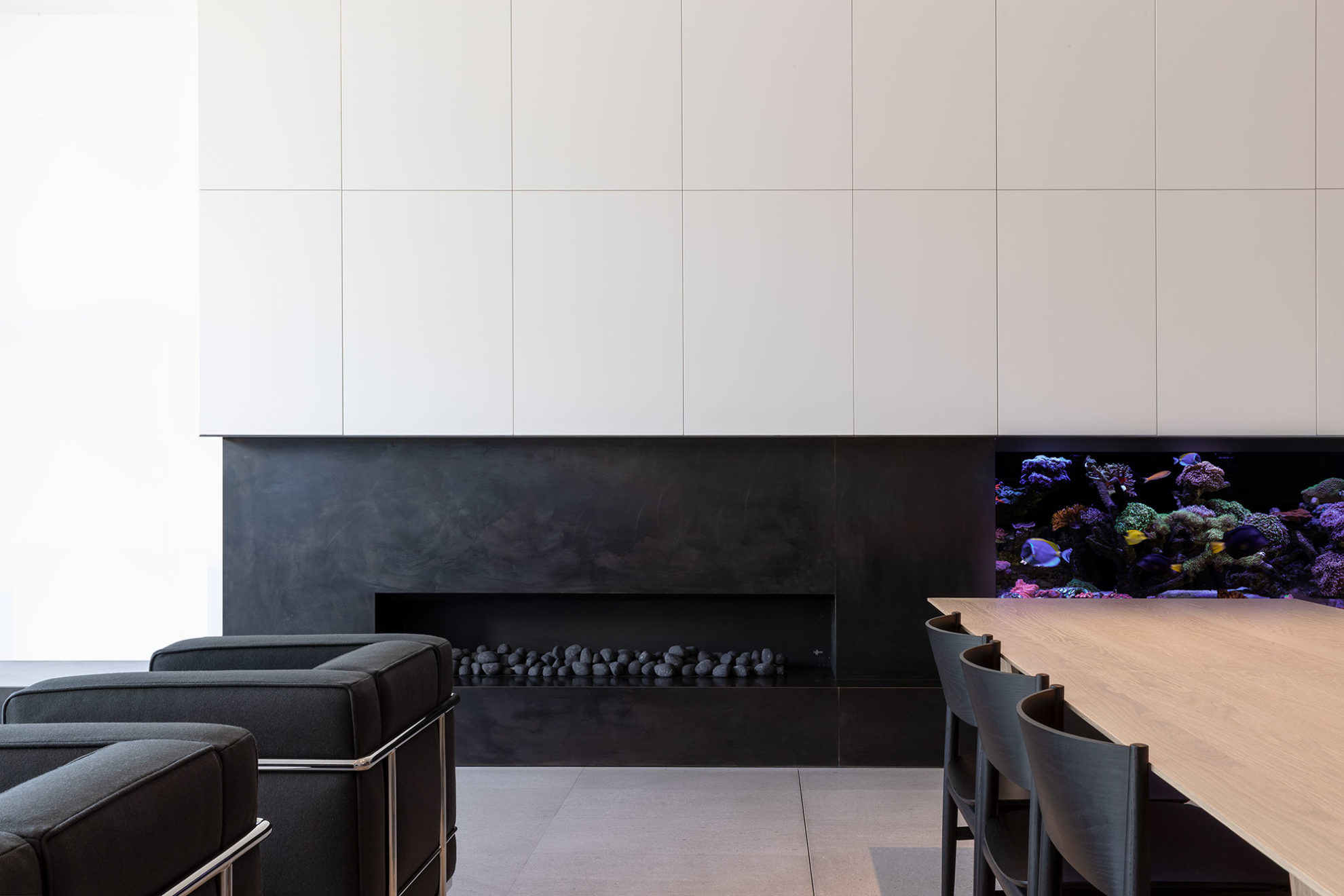 The studio addition is very much a modern interpretation of what can be seen in the laneway, there’s a consistent language.” 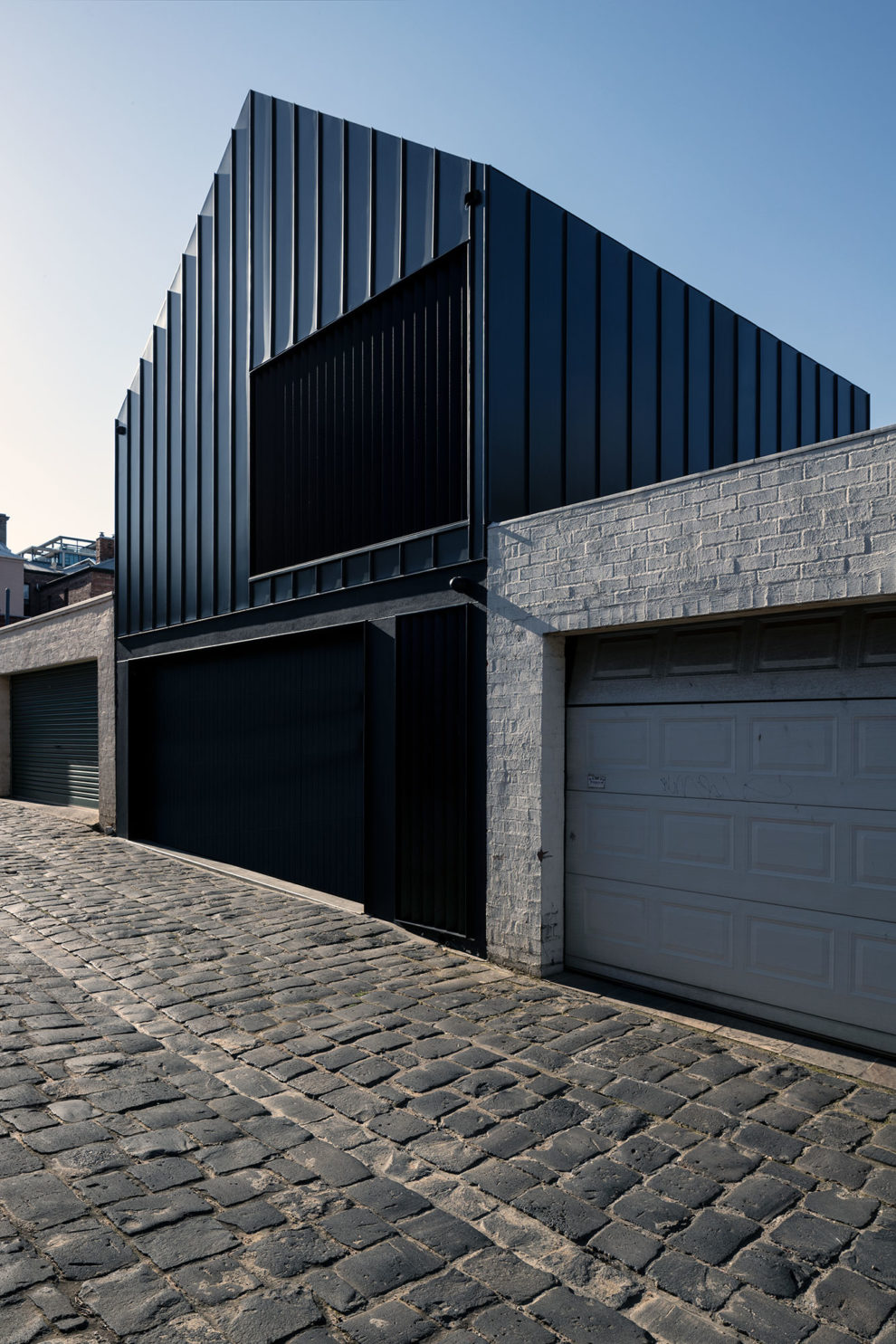 The external courtyard also follows a stripped back approach. The garden underwent a transformation with an out of place glazed pergola removed, as well as a line of conifer trees that were obscuring light to the living areas. Bluestone has been brought into the garden as stepped tiles, creating repetition with the zinc cladding on the carport and studio. The courtyard also provides space for the client’s passion of Japanese bonsai to be displayed, worked on, refined. All design elements spring from this as an anchor to the landscape and the views it affords.

The new garage and self-contained unit at the back of the site is very much a modern interpretation of the type of studios seen throughout the laneway, revitalising it through an adapted design language. The zinc clad building houses a two-car garage with laneway access, and a studio above, complete with bedroom, study and facilities to accommodate the client’s international guests.

Ultimately, this home provides sheltered respite for its inhabitants, while allowing them to feel connected to their surrounds, all while acknowledging the deeply embedded history of the home.

We took the clients on a journey of reduction.” 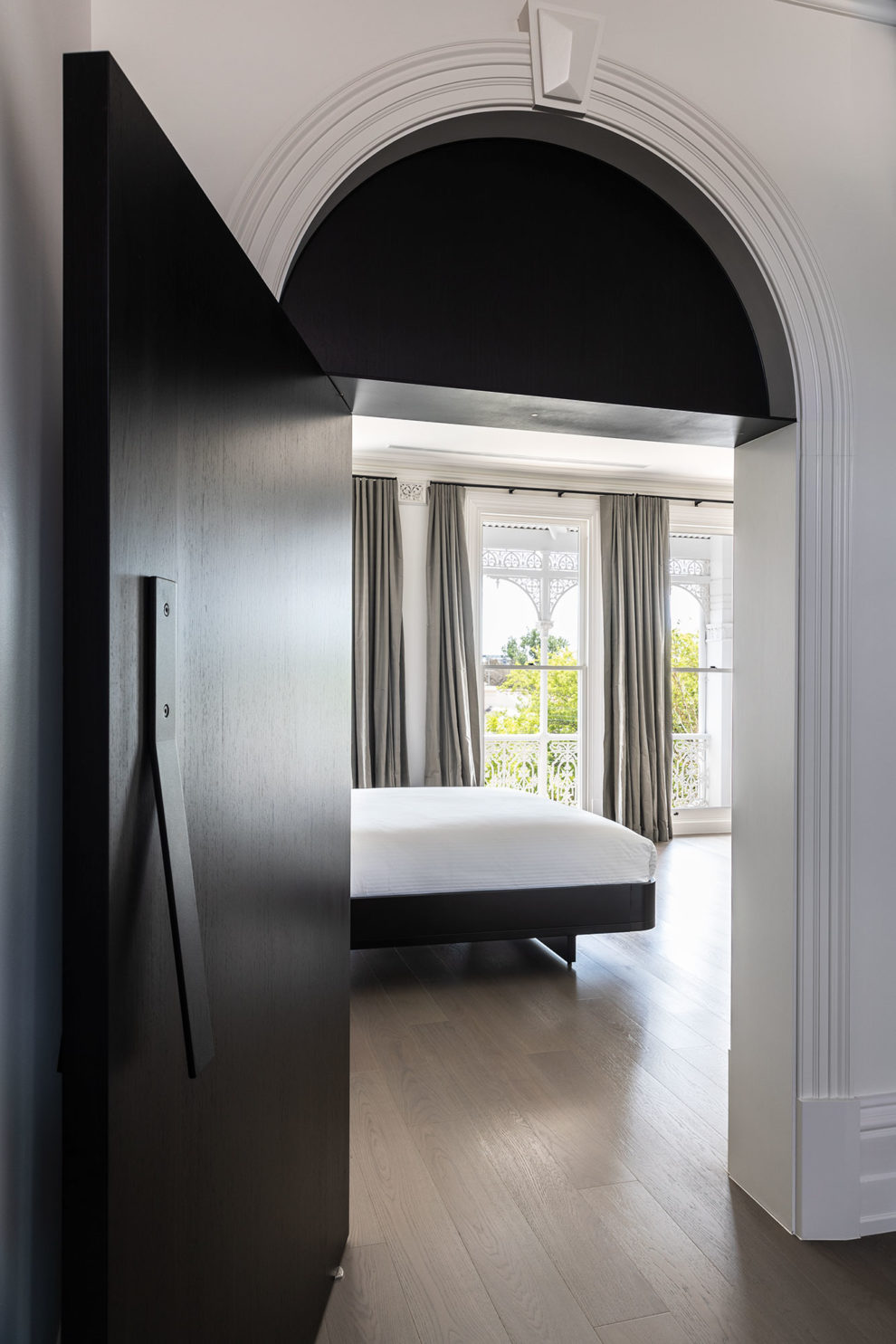 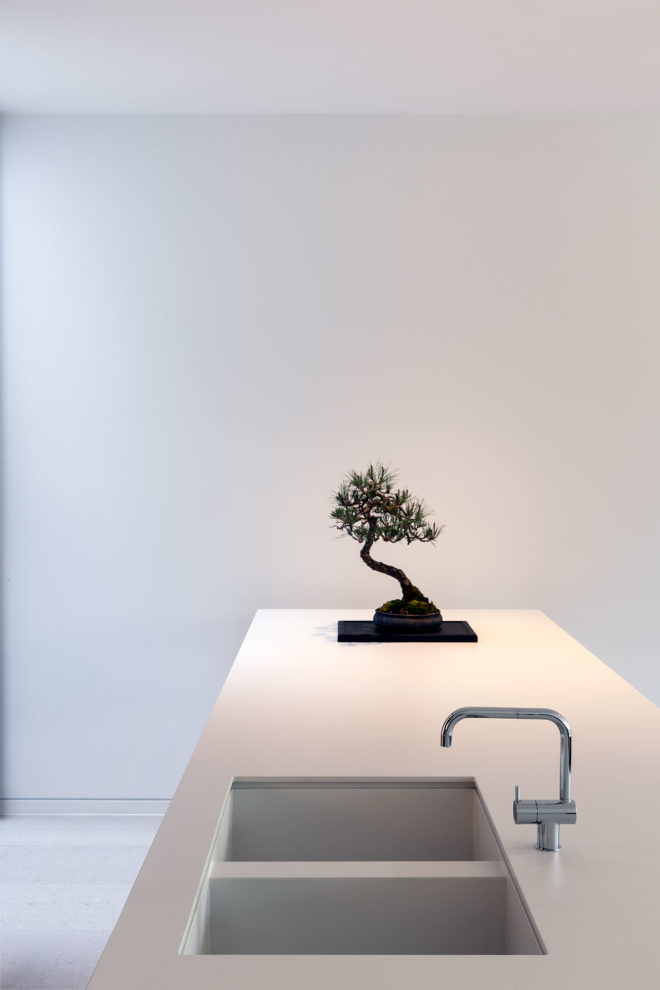 Read about artist Robert Owen, who created the sculptures in the hallway of this project.