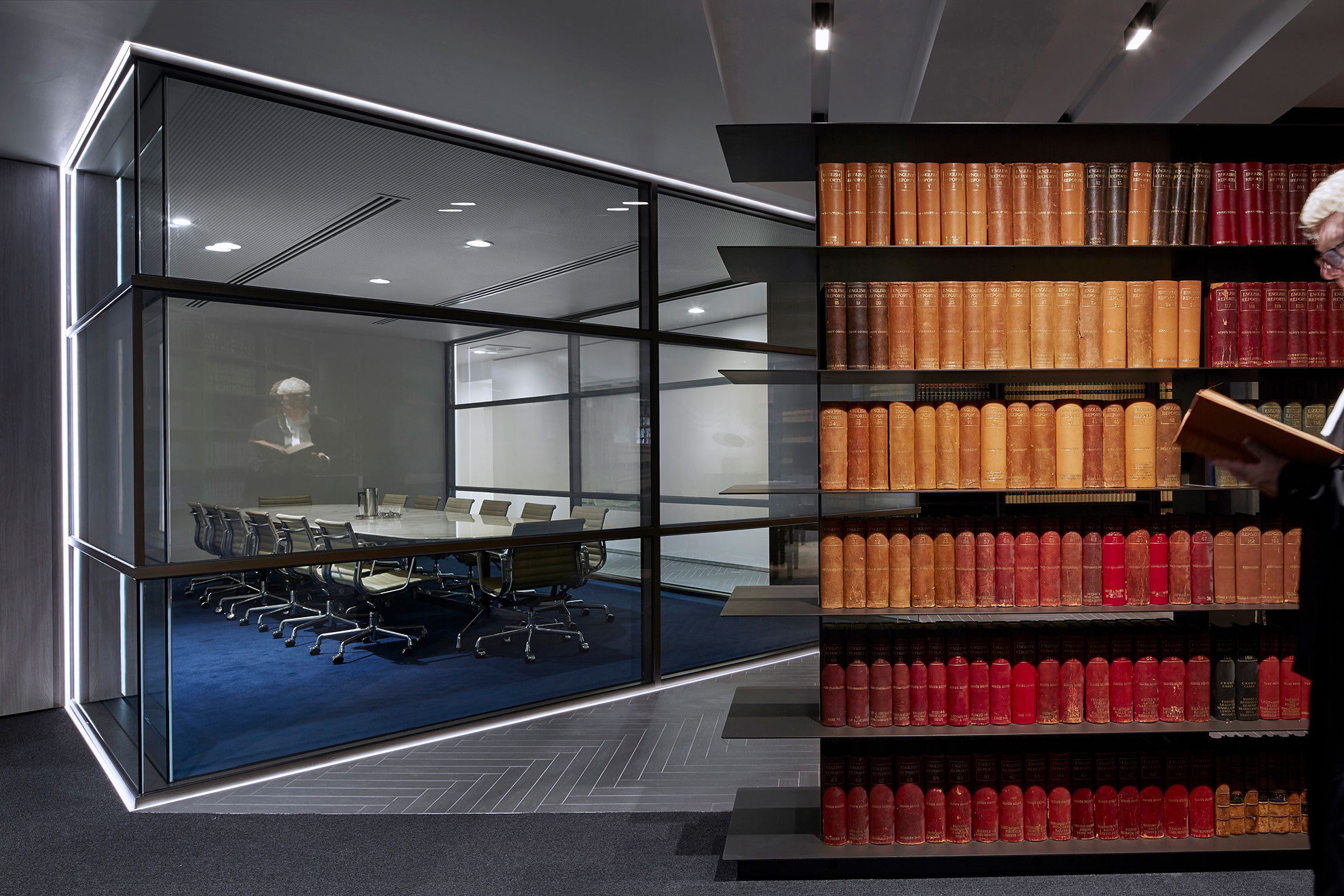 Stephen Crafti reflects one of Melbourne’s revolutionary barrister’s chambers at 200 Queen Street, an office fit-out driven by the vision of a group of Queen’s Counsels who sought Sue Carr to evolve their chambers to suit their personalities and work styles. 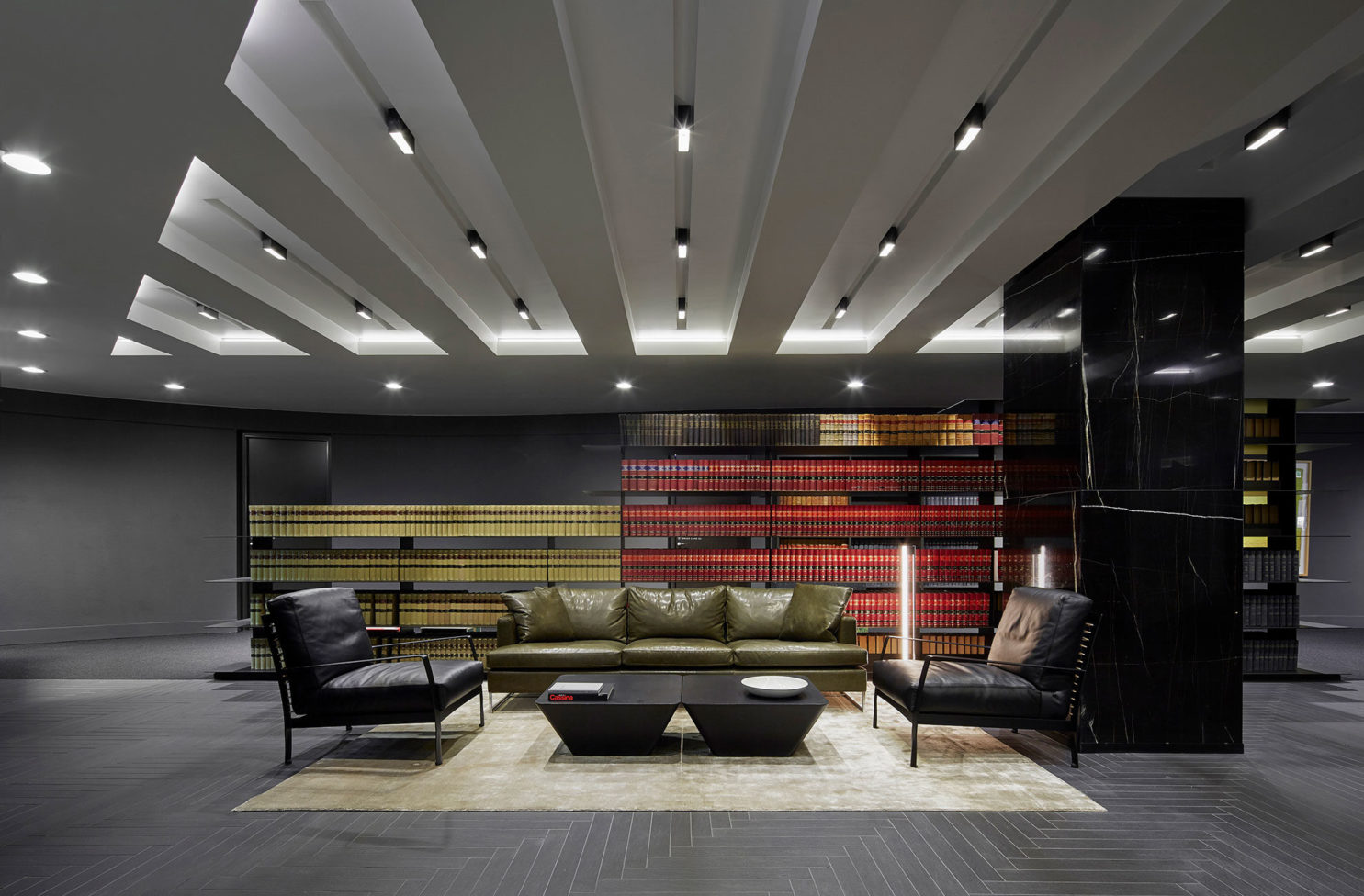 It’s difficult to reconcile the date 1984 with this office fit-out in Queen Street, Melbourne. Approaching 40 years since these barristers’ chambers were completed, (and while there are no recorded images of the original 1984 design*), the design not only demonstrates ‘timeless design’, but also the creation of a new way of working for some of the city’s most prominent lawyers.

This fit-out also coincided with being located in Grocon’s first high-rise building. Ron Merkel, a Queen’s Counsel, was keen to work in a new way with five of his friends who were already well-known in legal circles.

“We all got together and came up with key ideas we wanted to include, a great place to meet with colleagues as well as clients. We certainly weren’t looking for a ‘crusty’ office normally associated with lawyers in the 18th and 19th century, as well as timber-lined stuffy offices you can still experience today,” says Merkel. 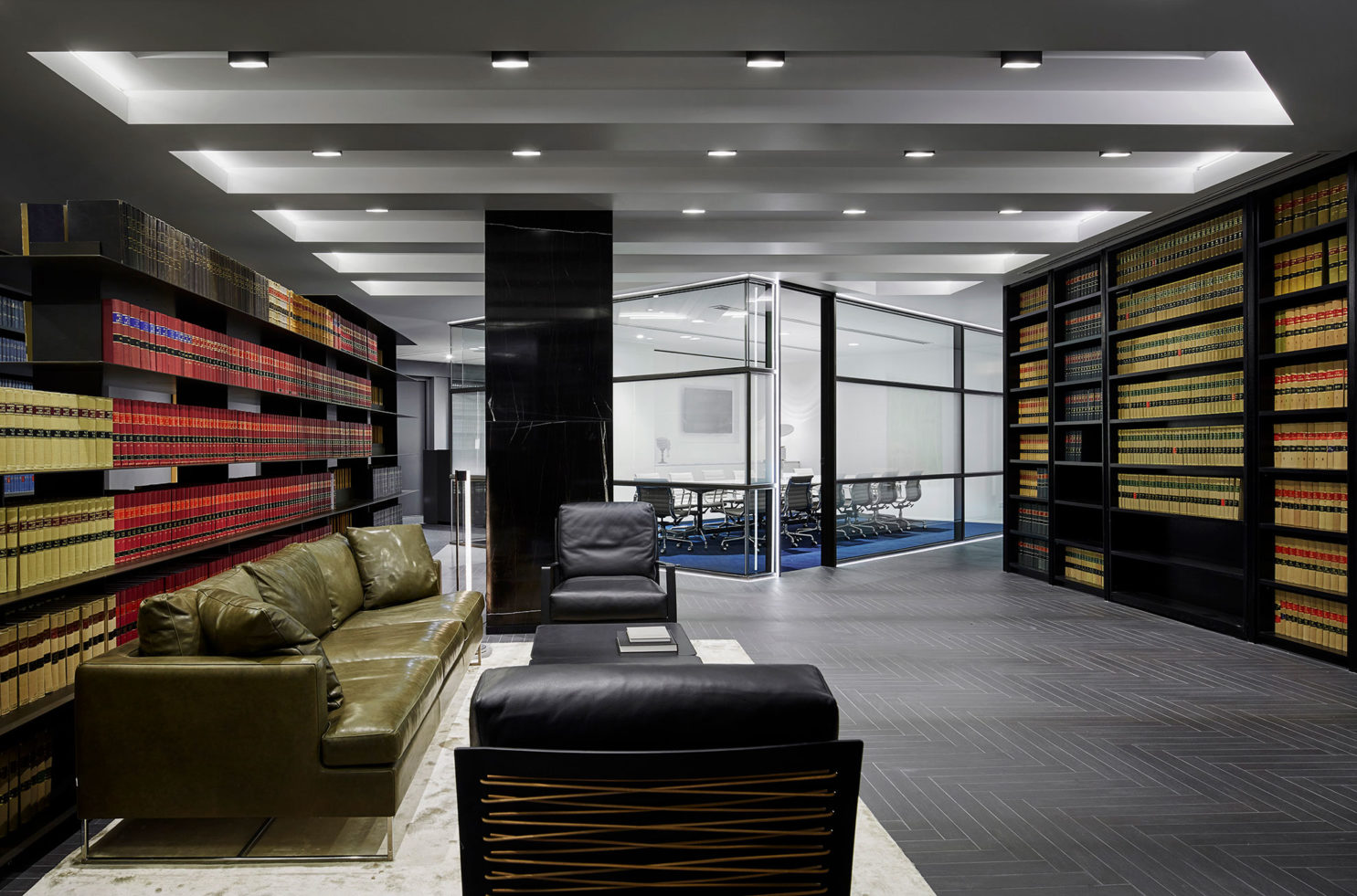 We all wanted to create a new niche for ourselves, something that was considerably more open and transparent than the chambers we had worked in for years.” 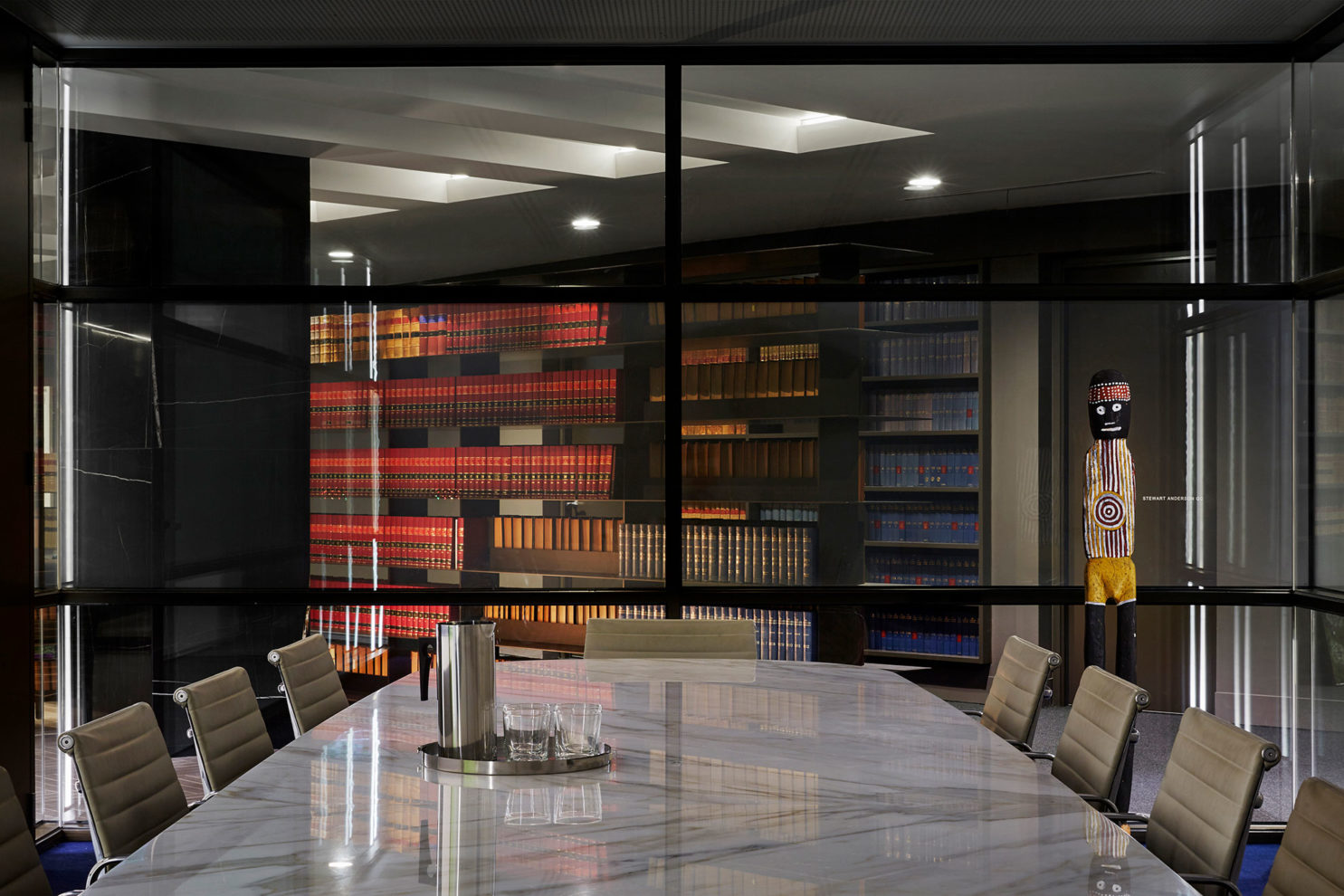 This commission for Carr came on the back of the completion of the Castan’s residence in Kew, often visited by Merkel.

“Ron was looking for something quite different for his new office that he was setting up with colleagues, something that was much more permeable,” says interior designer Sue Carr, who literally turned the traditional barristers’ chambers ‘upside down’.

Although Carr provided the barristers with individual offices, each one captured their personality and approach to work rather than one generic format repeated six times. And rather than lining each office with bookshelves, there’s one shared circular library at the centre of the floor plan that allowed for both more efficient space and, as importantly, an area to share and exchange information.

To maximise the use of this library, it was also conceived as a space to entertain. The six Queen’s Counsels – Alan Goldberg, Cliff Pannam, John Middleton, Raymond Finkelstein, Ron Castan and Ron Merkel – thought ‘outside the square’, as did Carr and her team (four of the six barristers went onto become Federal Court judges). “All were keen to share the spaces and the amenity, something that became a model for future chambers” says Carr. “They were all inspirational and wanted to work in the world of contemporary architecture and design,” she adds.

It was such a different way of approaching a fit-out for barristers. It really challenged the status quo entirely and, in a sense, 200 Queen Street became a benchmark that was used for numerous briefs that followed.”

Floor plan of Aickin Chambers at 200 Queen Street Melbourne, which was completed by Carr in 2015 and modeled on the original 1984 design. 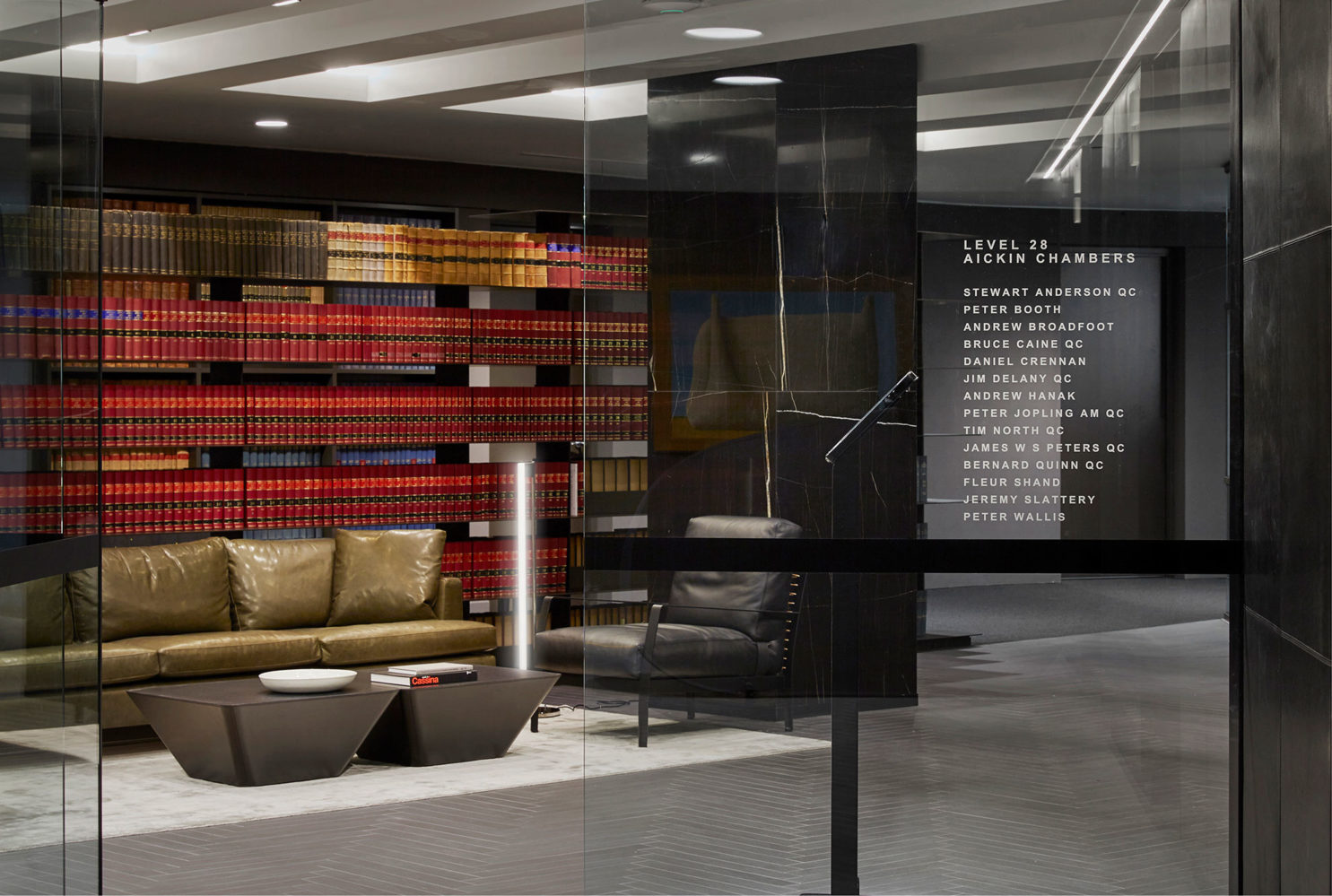 “We all wanted to create a new niche for ourselves, something that was considerably more open and transparent than the chambers we had worked in for years,”says Merkel, who left these chambers in 1996 after being appointed to the Federal Court.

“There were few doors and the few that existed were often left open for colleagues to enter,” says Merkel, who, as with his colleagues, appreciated the abundant natural light. And rather than just finding room for endless books and journals appertaining to law, the Carr team was mindful of bringing together wonderful collections of art and furniture that could be enjoyed by all, including visitors, rather than barristers working alone behind closed doors.

This unique model went onto inform and influence later barrister chambers, including planning in the Owen Dixon Chambers West such as the shared library and the lobby/arrival spaces (many of the six barristers came from this building).

We always enjoyed entertaining here, as well as coming to work. We never felt shut off, yet we still had more than sufficient privacy.”

“It was such a different way of approaching a fit-out for barristers. It really challenged the status quo entirely and, in a sense, 200 Queen Street became a benchmark that was used for numerous briefs that followed,” says Carr, who still recalls decades later as this being a ‘dream job’, with all involved being ‘on the same page’. And while there was consensus from the outset, the only challenge for Carr and her team was getting all six very busy QC’s together to discuss the finer detail required for any project. As a result, many meetings were held after work once court was over. But unlike many of the court cases heard during the day, decisions were ultimately unanimous!

Those now working in open plan law offices may think it’s been a recent mode of workplace. “Even then, we were looking to the future rather than simply replicating the past. It was certainly novel then, but now you could say that it’s more the norm,” adds Merkel.

*The photographs featured alongside this article are that of Aickin Chambers; a project completed by Carr in 2015 that based its design on the original 200 Queens Street completed in 1984. 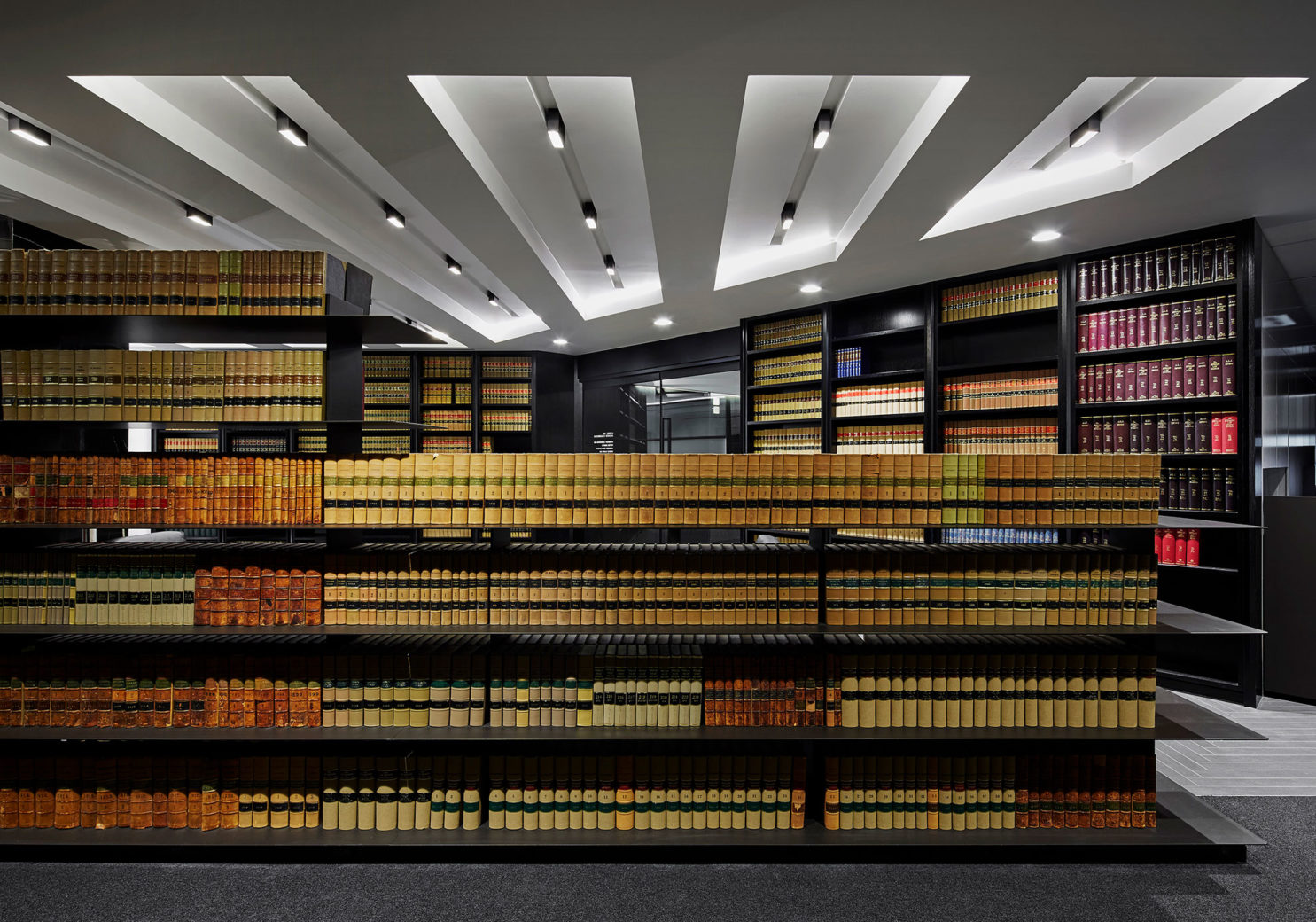 Read about the long-standing relationship between Carr and Norton Rose Fulbright, and the shared vision that has resulted in two decades collaborating on designing timeless and customised workplaces around Australia.