Set within Kensington’s historic industrial precinct, the eight-storey commercial development designed by Carr at 18-20 Bruce St is the first project to pass Melbourne City Council’s Green Factor Tool and is set to revive an area ready for life again. 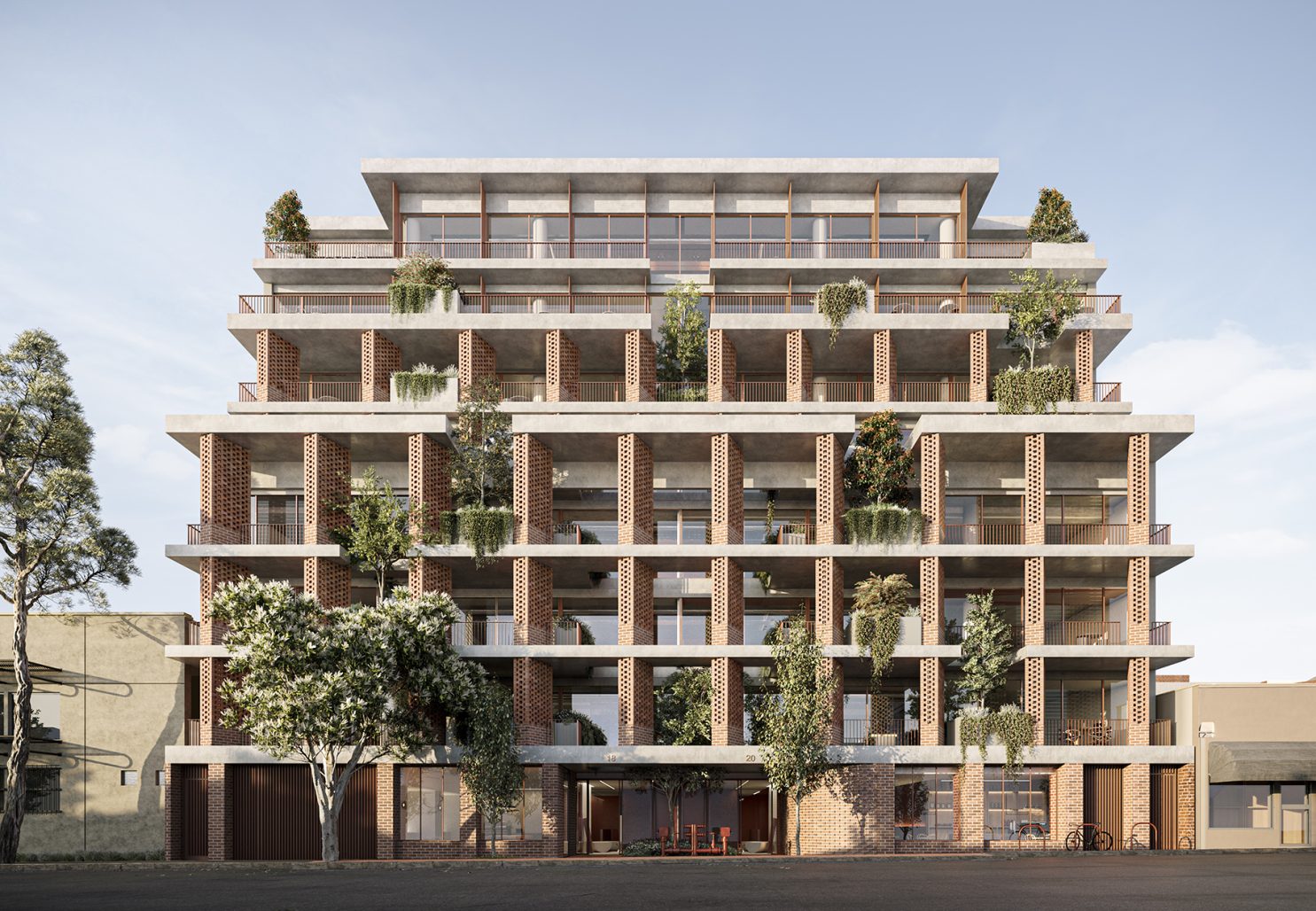 The Bruce directly responds to its location and sets to offer a complete contemporary workspace.

Nestled between North Melbourne and Flemington, The Bruce is uniquely placed to rejuvenate Kensington’s historical industrial wedge. Defined by its streets of red brick warehouses, towering grain silos and the Younghusband woolstore dating back to 1901, the proposed new eight-storey commercial building designed by Carr is the first development of scale in the precinct.

Delivering both the architectural and interior design elements, the proposal pays tribute to the project’s historical site with its robust form made up of concrete slabs spliced with red brick piers, balanced with fine metal balustrades. 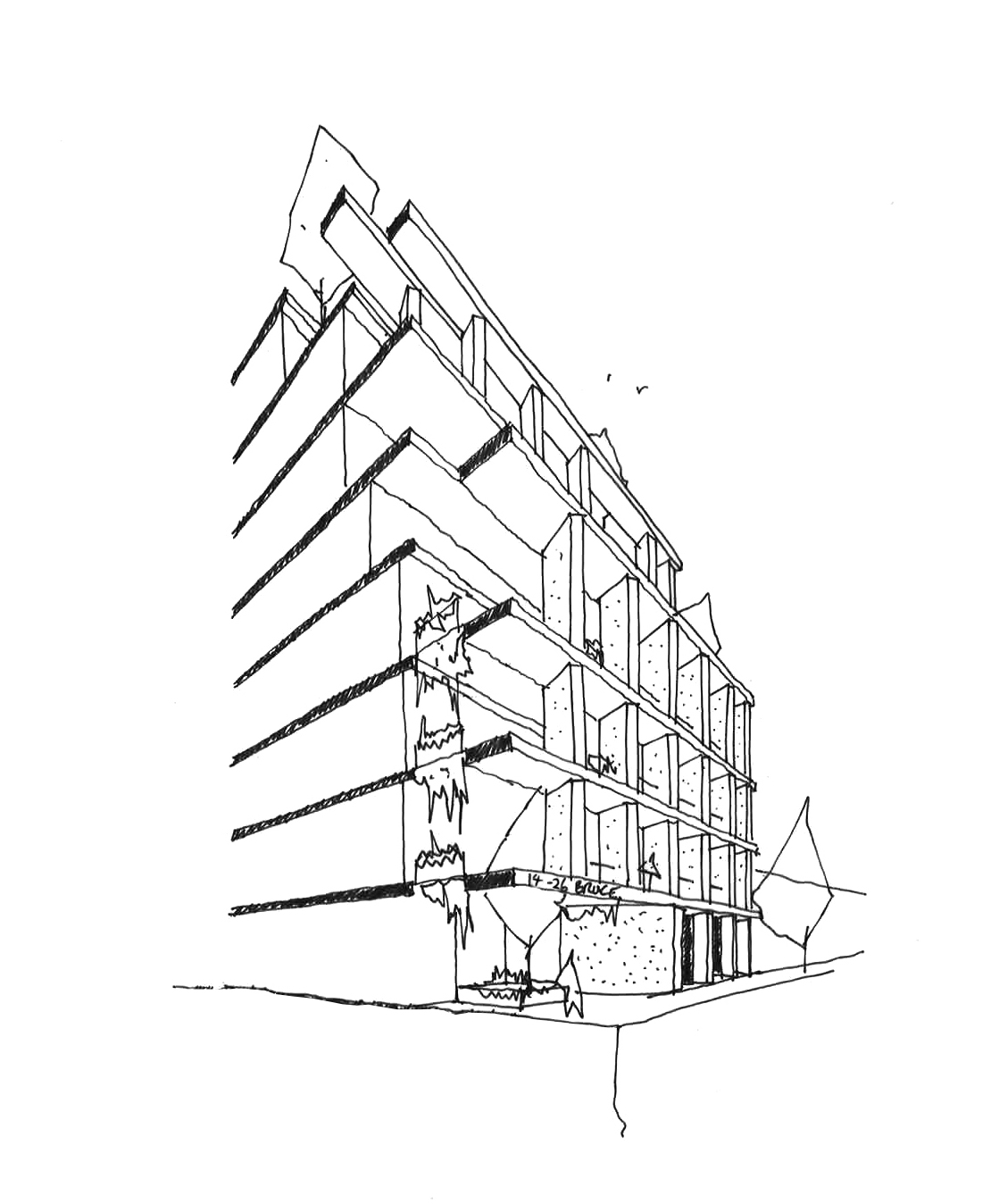 Composed predominantly of concrete, recycled bricks and glazed elements, the podium is made up of four levels and faces directly onto Bruce St, while the four levels above the podium are set back four meters to break up the form and massing. The architecture responds to the vernacular of the existing fabric of Kensington and nearby warehouse buildings.

The form is expressed as a series of slab edges that create a dialogue with the horizontal banding of the neighbouring warehouse buildings. Inserted skewed brick piers are positioned between the main façade and the boundary line, framing views to the northeast and towards the city to the southeast. The piers are positioned and utilised to provide passive solar protection from the western sun, while the hit and miss brickwork allows additional filtered natural light and a layer of articulation and craftmanship to the façade. Deep balconies protect glazing and offer ample outdoor amenity for tenants to enjoy.

Passive design elements like these mean that the architecture and the design is inherently sustainable from conception rather than an afterthought. 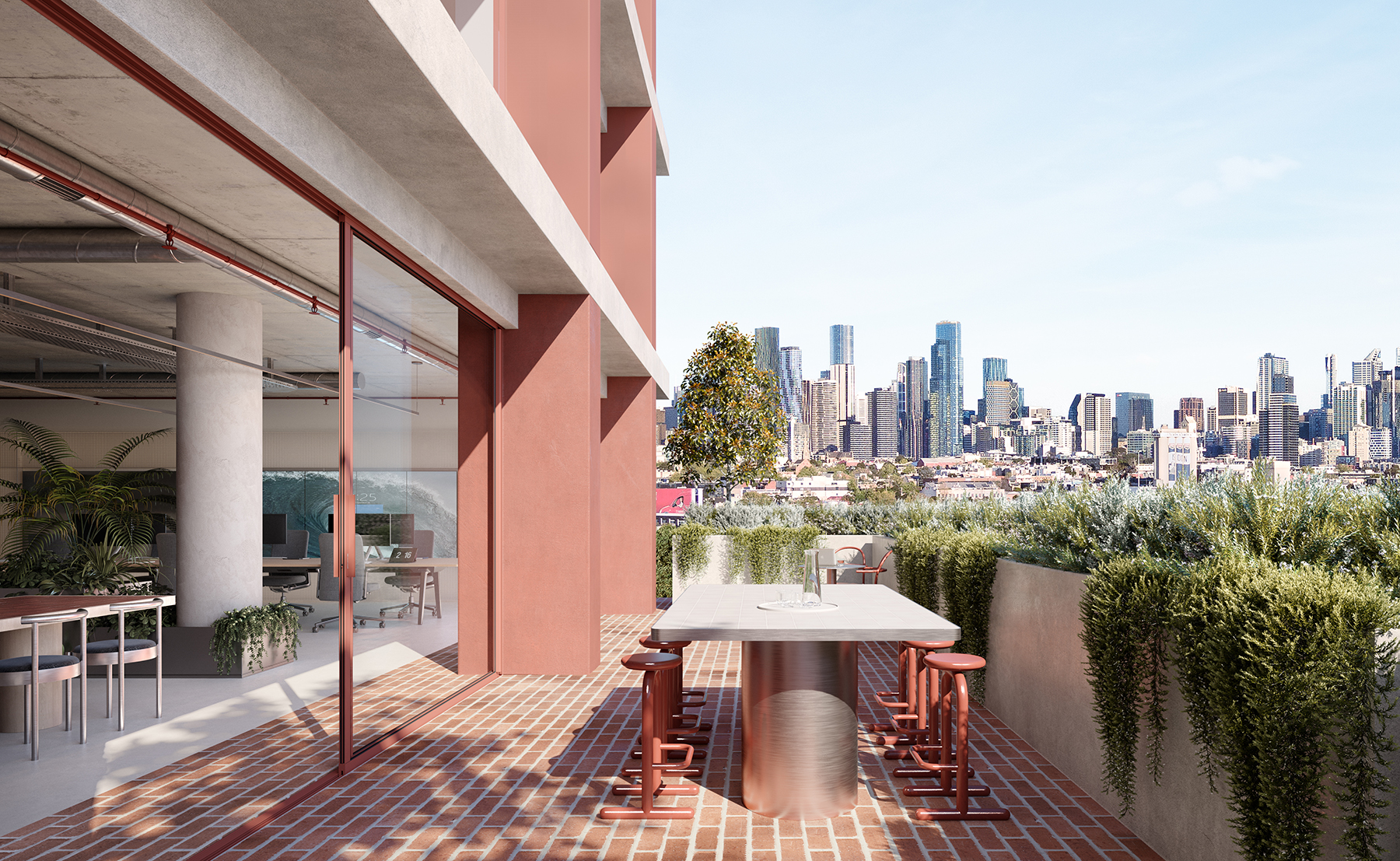 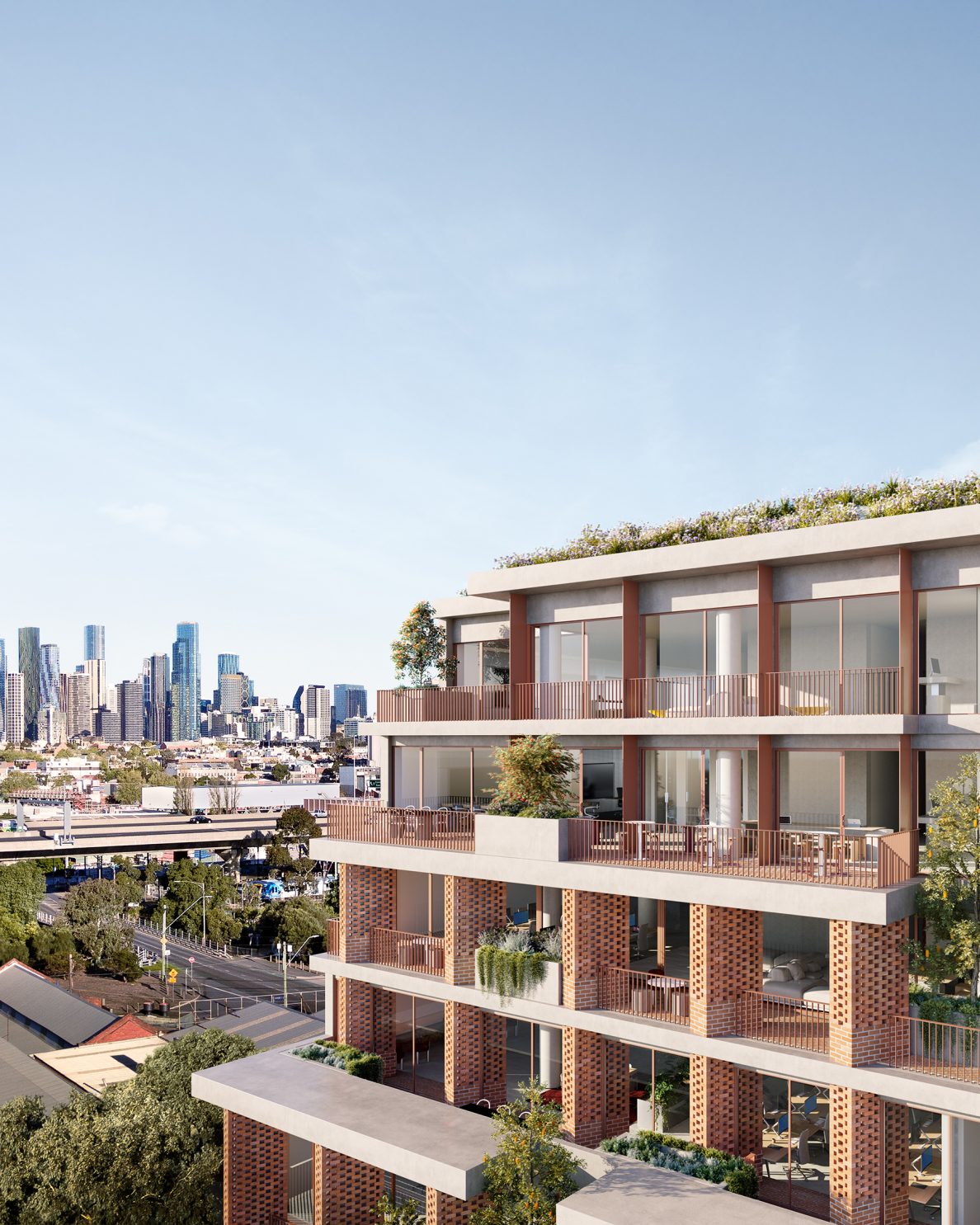 The Bruce is the first proposal to pass the Melbourne City Council’s new Green Factor Tool.

The entire façade is punctured and softened by the extensive landscaping allowed for in the double and triple height voids. Each floor has been designed to offer sightlines to green, be it via the trees dotted up the façade or the large concrete planters across the balconies.

At ground level, a large canopy tree is centrally planted and rises through the slab punctuation, becoming one with the building. Designed by Sydney Design Collective and Junglefy, the landscaping extends to include a 400-metre squared extensive bio-diversity green roof. Set to be used for research by the University of Melbourne and RMIT, the roof will create an important ecosystem and offer the local wildlife from the river refuge during migration seasons.

As a gas-neutral building and passive in its approach to sun shading, along with an array of other green initiatives, “the project is a direct response to the current climate and biodiversity emergency” says associate director Stephen McGarry.

Bruce Street is the first proposal to pass the Melbourne City Council’s new Green Factor Tool. The initiative, which has recently been formally adopted, will impose a positive obligation on landscape designers, architects, planners and developers to improve the extent of vegetation cover on private land in Melbourne.

We’re encouraged by the response from Melbourne City Council and hope The Bruce sets a benchmark precedent for the implementation of green infrastructure.” 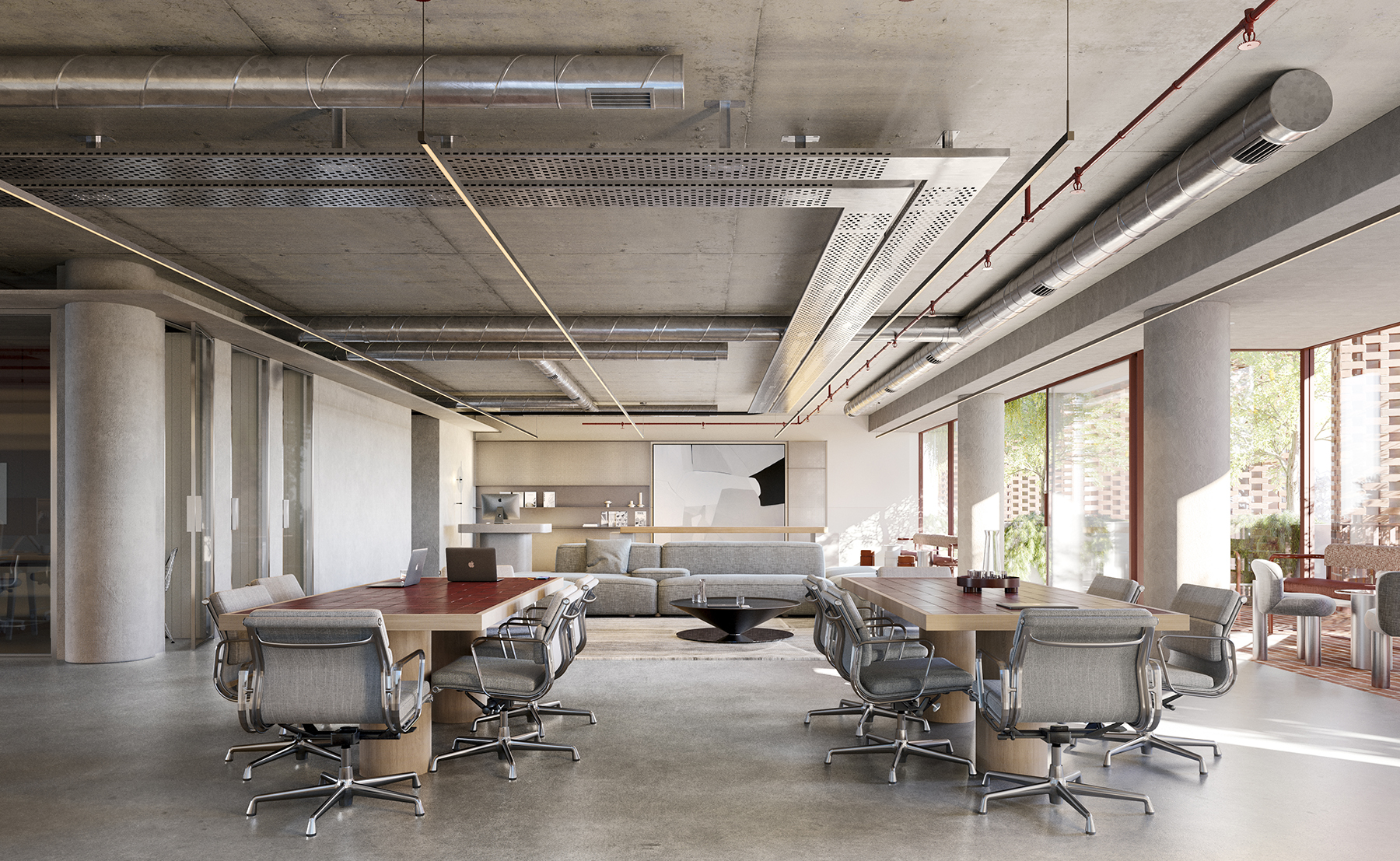 The exterior language is seamlessly translated throughout the tenancies and amenities. 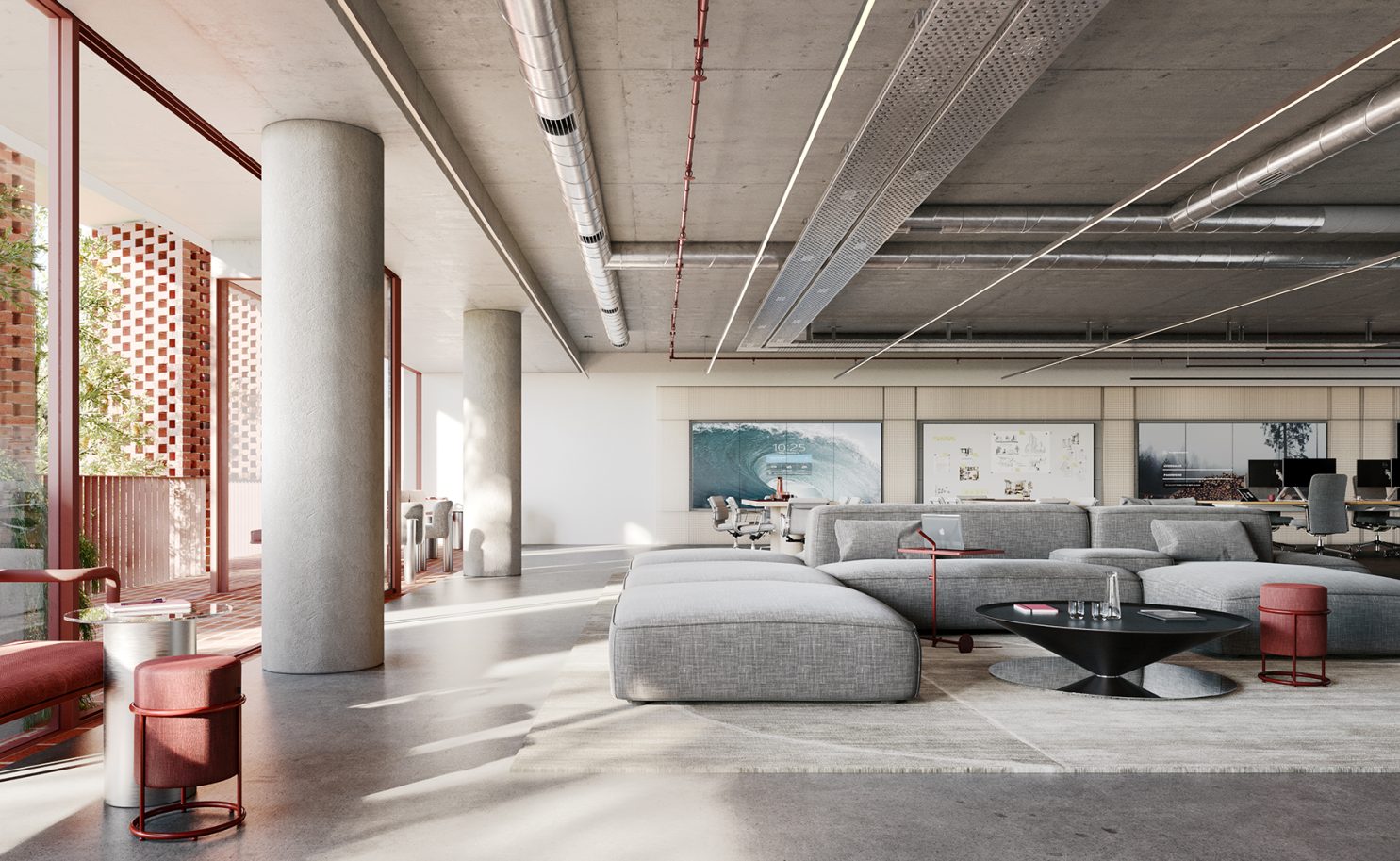 Internally The Bruce gradually transitions from brick pavers to concrete, bringing with it the rust red tones of the brick through the metal detailing and paintwork.

Carr are also designing the interior spaces and test fits, which ensures the exterior language is seamlessly translated throughout the tenancies and amenities. “By drawing on the collective experience of our dual-disciplined team, there is an opportunity for a robust conversation and debate around design detailing and resolution” explains Associate Richard Healy.

Internally the building gradually transitions from brick pavers to concrete, bringing with it the rust red tones of the brick through the metal detailing and paintwork. Comprising two lobby spaces side-by-side, the ground floor works hard to elegantly conceal extensive services and amenities, providing a serene space that is paired back in aesthetic.

Shared amenities include two communal meeting spaces and extensive end of trip facilities that are available to tenants. As a nod to its industrial heritage, the interior spaces are raw in design and feature bespoke lighting details and exposed soffits.

Bruce Street is a prime example that through a strong partnership between our interior and architecture teams, an elevated design proposition has helped us achieve a refined design outcome.” 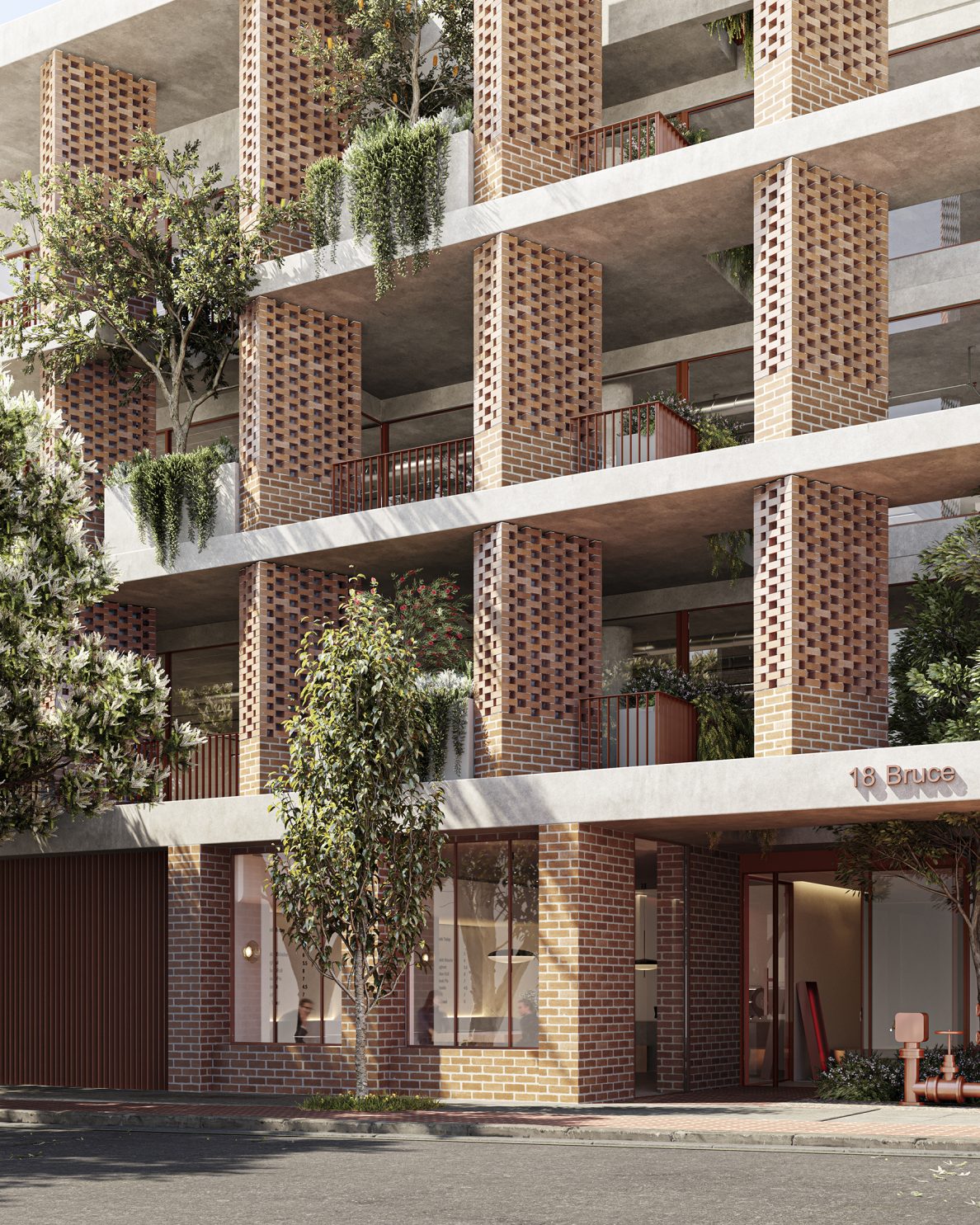 Moving up the levels, the building will offer half or full floor tenancies. Working on various test fits options, we are working with the client to offer a suite of layout options for potential tenants. All offices spaces are designed with wellness initiatives in mind. With large operable windows and sliding doors for natural ventilation, tenants will benefit from elevated views out. Deep balconies keep the sun off the glazing and will give all office spaces access to large private outdoor space.

After identifying Kensington as an overlooked city fringe suburb, developer, Medley Property Group, acquired the site off market and engaged Carr to help realise its vision to rejuvenating a mixed-use and lower-scaled part of Kensington. Bruce Street directly responds to its location and sets to offer a complete contemporary workspace. Setting a new benchmark for green design as the first project to pass Melbourne City Council’s Green Factor Tool, The Bruce will be the first of its kind.

Read a site update as the The Bruce nears completion and the construction and delivery benefits of a dual disciplined approach.